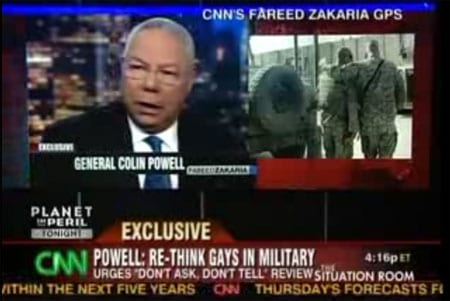 Colin Powell spoke with Fareed Zakaria on CNN’s The Situation Room today and said it was time to re-evaluate ‘Don’t Ask, Don’t Tell’.

Said Powell: “We definitely should reevaluate it. It’s been 15 years since we put in DADT which was a policy that became a law. I didn’t want it to become a law but it became a law. Congress felt that strongly about it. But it’s been 15 years and attitudes have changed and so I think it is time for the Congress, since it is their law, to have a full review of it, and I’m quite sure that’s what President-elect Obama will want to do.”

Following Powell’s remarks, Wolf Blitzer held a useless interview with former Ohio Secretary of State Ken Blackwell, who is running to be the next chairman of the Republican Party and is confident the policy works even though “he doesn’t have Powell’s experience” in the military.