Police are seeking information about four men who kidnapped and gang-raped a lesbian woman in Richmond, CA in San Francisco’s East Bay area, then fled with her car while she was left naked in the street: 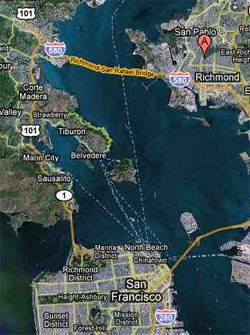 “The crime, which occurred on Dec. 13, is being investigated as a hate crime because of comments the suspects made about the victim’s sexual orientation, police said. The woman is openly lesbian and had a rainbow sticker on her license plate, a symbol of gay pride. ‘The emotional impact has changed her life,’ said Lt. Mark Gagan of the Richmond Police Department. ‘It is an absolute nightmare for her to have gone through. For 45 minutes, four strangers brutalized her.’ The ordeal began around 9:30 p.m. in the 1500 block of Visalia Avenue in Richmond’s Belding-Wood neighborhood, said Gagan. The woman was sexually assaulted in that location after she got out of her car, police said. Then she was forced back into her vehicle after the suspects noticed someone approaching. She was driven seven blocks away to the 1300 block of Burbeck Avenue, where she was repeatedly sexually assaulted near an apartment complex, Gagan said. After the attack, the men drove off in her car, police said. She sought help from a nearby resident who called police.”

Have we crossed that violence threshold yet, Mike Huckabee?

Shane Hensinger at DailyKOS notes: “Gay people and especially trans people are routinely targeted for rape, assault and murder because the message people are still getting from society is that we’re lesser and when we stand up for ourselves, when we get ‘uppity’ then we can expect a violent response in return – whether it’s getting our heads bashed in, being gang-raped or shot to death in school.”

What a sick, despicable horror this woman has had to endure. She is in our thoughts tonight.