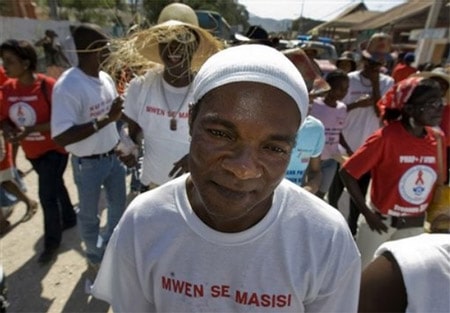 A march yesterday was the first time demonstrators have declared their sexuality publicly in the Caribbean island nation of Haiti. Yesterday, 500 took to the streets in St. Marc wearing T-shirts saying “I am gay” (“Mwen Se Masisi”) and “I am living with AIDS.”

“Organizers said they hoped the march will break barriers to reach more HIV-positive people and gay men with programs that have helped decrease the country’s infection rate by two-thirds in the last decade. ‘They suffer double the stigma and double the discrimination,’ said Esther Boucicault Stanislas, a leading activist known as the first person in Haiti to publicly declare that she was HIV-positive after her husband died of AIDS in the early 1990s. About 500 participants that included health ministry officials and workers with United Nations programs followed a speaker-truck through the dusty city, chanting and carrying banners en route to the mayor’s office. No officials received them. AIDS awareness marches have taken place before in Haiti, but Boucicault and organizers with New York-based AIDS service organization Housing Works called this one the first march to include an openly gay group in Haiti.” 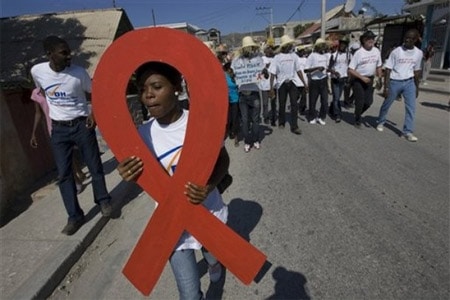