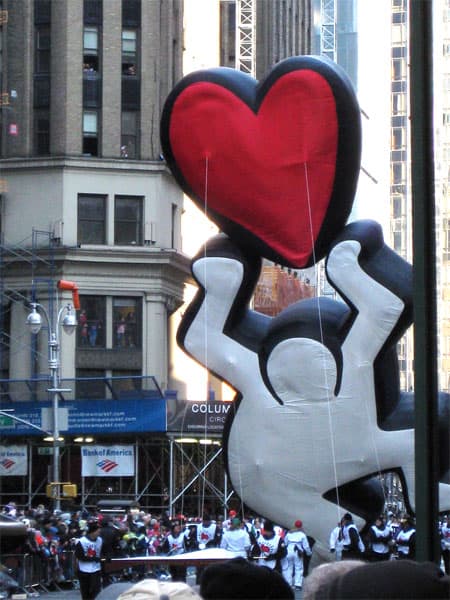 Today is the 20th Anniversary of World AIDS Day, designated in 1988 at a summit of health ministers to bring awareness to the HIV pandemic and its consequences and challenges.

Above is the Keith Haring balloon which debuted on Thursday in the Macy’s Thanksgiving Day parade. Haring died of AIDS-related complications at the age of 31 on February 16, 1990. He would have turned 50 in the coming year. It is a wish fulfilled for Haring, who always dreamed of having his work in the traditional New York holiday event. Photo by flickr user Ben + Sam. 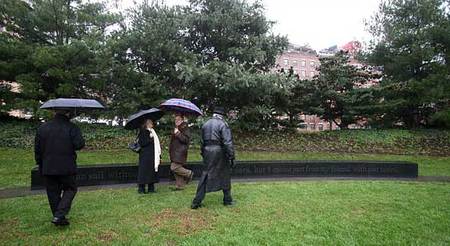 A memorial bench (above) at Hudson River Park near Bank Street in NYC was dedicated on Sunday. It’s the first such memorial in New York. A video of yesterday’s dedication ceremony is below. The NYT tells its story:

“Late Sunday morning, Mr. Marber joined Mr. Swehla and three other board members at a spot in Hudson River Park near the end of Bank Street where Pier 46 used to extend into the water. In the steady, cold rain, the four men and one woman huddled in hats, holding umbrellas. ‘It started like a cruise, and ended like a shipwreck,’ said Michael Sypulski, an artist who joined the efforts early on. ‘There’s just a few of us straggling on shore.’ Bedraggled or not, all five were beaming, Mr. Swehla most of all. In front of him, a semicircular balcony hung gracefully over the water. Behind him, on a green knoll, a footpath curved around, with a 42-foot black granite bench echoing its curve. Inscribed in the granite were words thought to originate in a Scandinavian folk song: ‘I can sail without wind; I can sail without oars. But I cannot part from my friend without tears.’ From the bench, a visitor could look out on the water, or contemplate the pilings where the pier used to be, a memory, for some, of liberated if debauched times, a metaphorical reminder, for others, of loss and absence — a ruin.” 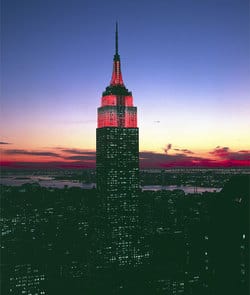 Here’s some info on what (RED), the project created by Bobby Shriver and Bono to help eliminate AIDS in Africa, is doing today. Starbucks will contribute five cents for every hand-crafted beverage sold today at participating locations in the U.S. and Canada to the Global Fund to help save lives in Africa. The beverages are Peppermint Mocha Twist, Gingersnap Latte and Espresso Truffle.

In addition, the Empire State Building will glow red tonight as part of the partnership between Starbucks and (RED).

President-elect Obama and President Bush will both deliver remarks today commemorating World AIDS Day: “Both will attend a civil forum hosted by Saddleback church pastor Rick Warren in D.C., where Bush will receive be awarded a medal for his efforts fighting AIDS. Obama will deliver taped remarks by video to the Saddleback Civil Forum on Global Health, according to the presidential transition team. Bush is scheduled to make a statement from the North Lawn of the White House. He will receive the first ‘International Medal of PEACE’ from the Global PEACE Coalition during the forum.” 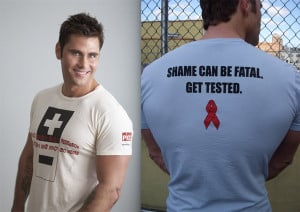 Project Runway contestant and designer Jack Mackenroth, who has been an outspoken voice for people living with HIV, designed a T-shirt in recognition of World AIDS Day. He writes: “On the front it says ‘Love across barriers soothes the heart and cures the soul.’ Initially the meaning behind that was to unite HIV- and HIV+ people and remind us that love is a great solution to everything. However the saying can be applied to all difficult, opposite or non-traditional relationships. For the design I played with positive and negative space. The back says ‘Shame can be fatal. Get tested.'” It is available gay and bisexual men continue to be the demographic most affected by HIV/AIDS: “The report, released just ahead of World AIDS Day on Monday, found while Massachusetts has had success battling the spread of the disease among injection drug users and heterosexual men and women, it has had less success among gay and bisexual men. More than half of HIV infections between 2004 and 2006 were among gay and bisexual men even though just 4 to 9 percent of Massachusetts men report having sex with other men in annual surveys. Among the encouraging signs in the study is the increase in reported condom use. Fifty-six percent of gay and bisexual men who responded to a 2005-06 health survey reported regular condom use, up from 36% in 2000.”

A new report from China offers some grim statistics. 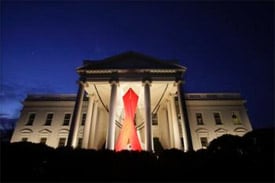 The AP reports that some experts are making the dangerous claim that the progression of treatment for AIDS has lessened the need for so many world health organizations: “Roger England of Health Systems Workshop, a think tank based in the Caribbean island of Grenada, goes further. He argues that UNAIDS, the U.N. agency leading the fight against the disease, has outlived its purpose and should be disbanded. ‘The global HIV industry is too big and out of control. We have created a monster with too many vested interests and reputations at stake, … too many relatively well paid HIV staff in affected countries, and too many rock stars with AIDS support as a fashion accessory,’ he wrote in the British Medical Journal in May. Paul de Lay, a director at UNAIDS, disagrees. It’s valid to question AIDS’ place in the world’s priorities, he says, but insists the turnaround is very recent and it would be wrong to think the epidemic is under control. ‘We have an epidemic that has caused between 55 million and 60 million infections,’ de Lay said. ‘To suddenly pull the rug out from underneath that would be disastrous.'”

Madonna’s AIDS documentary I Am Because We Are airs tonight on Sundance. It looks at the plight of orphaned children in Malawi as a result of HIV and AIDS. Here’s the trailer.

The AP reports: “The feature-length film was written, produced and narrated by Madonna (directed by Nathan Rissman). It consults experts including President Bill Clinton and Archbishop Desmond Tutu. But the film’s real power is its images, which are often dismaying but, here and there, reflect hope and a remarkable will to survive. ‘I had many goals,’ said Madonna during a phone conversation from her Manhattan home a few days ago. ‘I did get to a point where I thought, ‘I’m being overambitious, I’m trying to say too much, I’ll never accomplish it.’ But I feel proud of the fact that I did get to make all my points.’ Among her points: an insistence that any crisis comes with solutions, however hard-won and piecemeal. The film offers its audience a menu of constructive responses.”

There will be an event in recognition of World AIDS Day in New York this evening, hosted by ACT UP/NY, AREA, BC/EFA, GMHC, IAPI, Keith Haring Foundation and LIFEBeat. CANDLE LIGHT VIGIL begins at 6PM

The candlelight vigil begins at 6 pm at the Gay Men’s Health Crisis – Tisch Building Lobby, 119 West 24th St. (btwn 6th/7th Ave.) A candle light procession will then head to Judson Memorial Church at 55 Washington Square South (at Thompson St.). Time of Reflection to those we have lost to AIDS begins at 6:30PM (for those not at Candlelight Vigil) World AIDS Day Program begins at 7pm.

Our reader Robert Vinci sends in this photo of the obelisk in Ibirapuera Park in Sao Paulo, Brasil, appropriately wrapped. 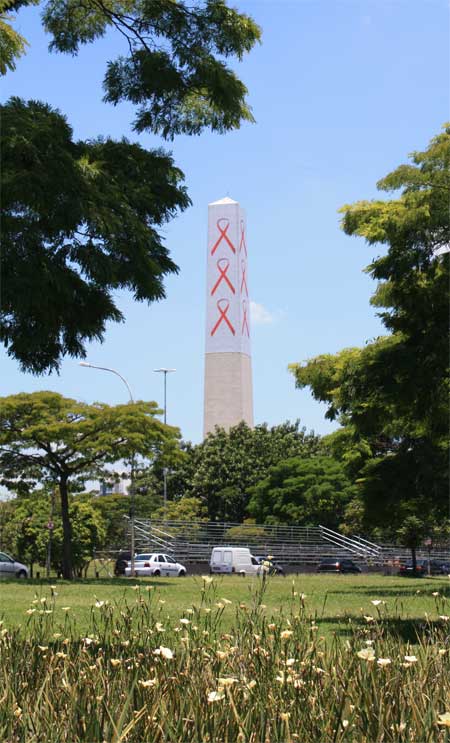 A few short clips AFTER THE JUMP with regard to WORLD AIDS DAY.

An event in Hollywood over the weekend, below left, and in Glasgow, Scotland, a flash mob in observance of the day took place.