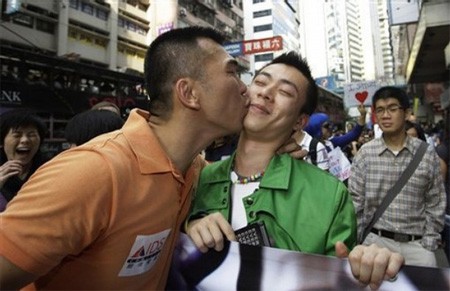 “People emerged from shops and restaurants to witness the historic event. While some spectators cheered in support, most looked confused and bewildered. ‘I never thought I would see this in Hong Kong,’ said Kevin Li, a salesman who nevertheless believes the younger generation is less homophobic than the older one. ‘Our society has different values than the West regarding sex because we are more traditional and more Chinese.’…Hong Kong lacks any non-discriminatory ordinance, and many locals still regard homosexuality with unease. Eric Herrera, a member of a white-collar gay-rights group called Fruits in Suits, which helped organize the parade, said, ‘I have no problem walking down the streets arm in arm with my partner of 21 years, but it makes many people very uncomfortable.'”

Two videos of the event, including some go-go boys dancing to Donna Summer’s “Hot Stuff”, AFTER THE JUMP… 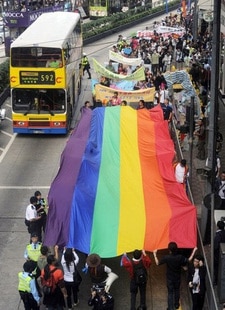 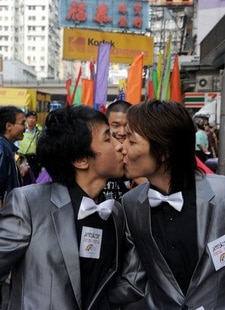 Fridae reports: “At last it has happened. Hong Kong’s first gay pride parade processed through the crowded streets of Hong Kong Island on the afternoon of Saturday 13 December. And it was a huge success. Some 1,200 men and women, young and old, mostly gay but with some straight friends too, marched for just under two hours from the assembly point outside the Causeway Bay MTR entrance in Great George Street, one of the most congested places on the face of the planet, straight along the major East-West thoroughfare of Hennessy Road to its final destination in the public Southern Playground near Wanchai’s station.”

Previous Post: « Bush Doesn’t Let the Shoe Hit Him on the Way Out
Next Post: Fight Club: Robert Downey Jr. as the New Shirtless Sherlock »