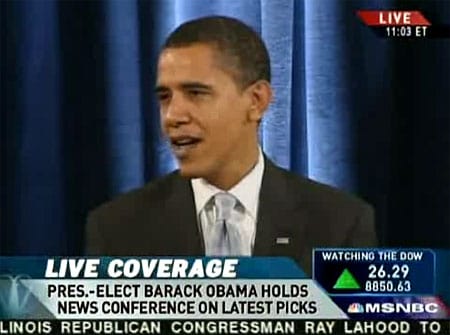 At a press conference this morning, Barack Obama defended his invitation to anti-gay pastor Rick Warren to give the invocation at his inauguration.

“Well, let me start by talking about my own views. I think it is no secret that I am a fierce advocate for equality for gay and lesbian Americans. It is something I have been consistent on and something I intend to continue to be consistent on during my presidency…What I’ve also said is that it is important for America to come together even though we may have disagreements on certain social issues…And I would note that a couple of years ago I was invited to Rick Warren’s church to speak, despite his awareness that I held views entirely contrary to his when it came to gay and lesbian rights, when it came to issues like abortion….Nevertheless, I had an opportunity to speak, and that dialogue, I think, is a part of what my campaign’s been all about, that we’re never going to agree on every single issue. What we have to do is create an atmosphere where we can disagree without being disagreeable, and then focus on those things that we hold in common as Americans. So Rick Warren has been invited to speak, Dr. Joseph Lowery — who has deeply contrasting views to Rick Warren about a whole host of issues — is also speaking.”