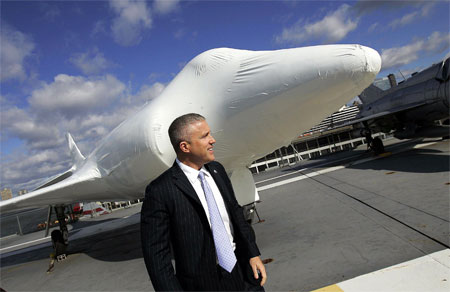 The Washington Times reports that gay COO of the Intrepid Museum Foundation William White is being pushed by some for Secretary of the Navy:

“The secretary’s job is a civilian position, so it would not run afoul of the ban on gays serving in the military, but it would renew focus on the “don’t ask, don’t tell” policy as President-elect Barack Obama prepares to take office. ‘He would be phenomenal,’ said retired Gen. Hugh Shelton, who was chairman of the Joint Chiefs of Staff from 1997 to 2001, pointing to Mr. White’s extensive background as a fundraiser for veterans’ and military causes. Retired members of the Joint Chiefs have contacted Mr. Obama’s transition team to urge them to pick Mr. White, and members of Congress said he would be a good choice for a service secretary. ‘He’s very capable,’ said Rep. Jerrold Nadler, New York Democrat, whose district includes the Intrepid Museum, a retired aircraft carrier berthed on the Hudson River in New York City.”