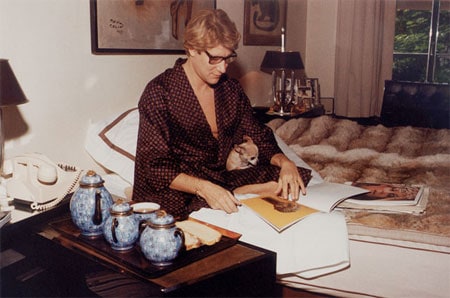 In February, Yves Saint Laurent’s longtime partner Pierre Bergé will hold an auction at Christie’s of the objects that filled the couple’s duplex in Paris. Vanity Fair offers a visual tour.

Bergé, who joined with the designer in a civil union known as a “civil pact of solidarity” in France a few days before he died, said this of the collection:

“For a month, Yves had cancer and I had plenty of time to think. I decided to sell everything because the collection doesn’t exist if he doesn’t exist. After Yves’s death, to conserve the collection makes no sense. It will go away just like that. We all would very much like to attend our own funeral; of course, we can’t. But we can attend the funeral of a collection. It’s the end. It’s over. Economically, it’s impossible to do again. At my age, you don’t start a new collection, or buy wine too young, or plant small trees. In life we have to share—money, culture, everything. I love that idea. I’m very happy to have made with Yves one of the greatest collections of the century. In a few years, I will be very pleased to see at an exhibition the label ‘Provenance Yves Saint Laurent and Pierre Bergé.’ In time people will tell one another, ‘You really should know about these two guys, who lived in the 20th century in Paris.’ I don’t believe in God. I only believe in human beings, in memory. That’s all. The memory will persist.”

Previous Post: « Robert Pattinson Shunned as a Model When He Got Too Manly
Next Post: News: Jose Sucuzhañay, MRI, Google Zeitgeist, Ryan Gosling »