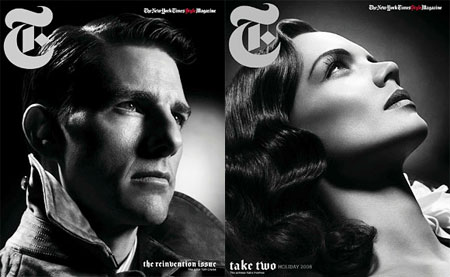 HOLMES: “When I met Tom, I was completely in love and, yes, I admired him growing up — he’s Tom Cruise! And, yes, I followed his movies and maybe had his photo up on my wall. I thought, How does he do what he does? And when I met him, he was so warm and I thought, Wow! You can be a superstar and a human being. He made me feel so amazing.”

CRUISE: “As a young girl, Kate said she dreamed of marrying me. And I said I wouldn’t want to disappoint her. I knew I wanted to marry Kate when I met her. After our very first date, I was sure. So I bought the ring shortly after that first date. At one point, I thought she was going to ask me to marry her first and I put her off by changing the subject. I wanted to ask her.”

Additional video, AFTER THE JUMP…