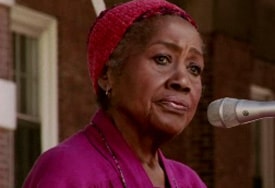 “Odetta sang at coffeehouses and at Carnegie Hall, made highly influential recordings of blues and ballads, and became one of the most widely known folk-music artists of the 1950s and ’60s. She was a formative influence on dozens of artists, including Bob Dylan, Joan Baez and Janis Joplin. Her voice was an accompaniment to the black-and-white images of the freedom marchers who walked the roads of Alabama and Mississippi and the boulevards of Washington in the quest to end racial discrimination. Rosa Parks, the woman who started the boycott of segregated buses in Montgomery, Ala., was once asked which songs meant the most to her. She replied, ‘All of the songs Odetta sings.’ Odetta sang at the march on Washington, a pivotal event in the civil rights movement, in August 1963. Her song that day was ‘O Freedom,’ dating to slavery days: ‘O freedom, O freedom, O freedom over me, And before I’d be a slave, I’d be buried in my grave, And go home to my Lord and be free.'”

The Boston Globe writes, in their obituary: “She was full of surprises in recent years, too. Indie-pop auteur Stephin Merritt recruited Odetta to sing ‘Waltzing Me All the Way Home’ on the 6ths album ‘Hyacinths and Thistles’ in 2000. He later said Odetta had told him she thought the song was about two gay black soldiers during World War II, which was news to Merritt.”

Listen to it here:

A couple clips in Odetta’s honor, AFTER THE JUMP…