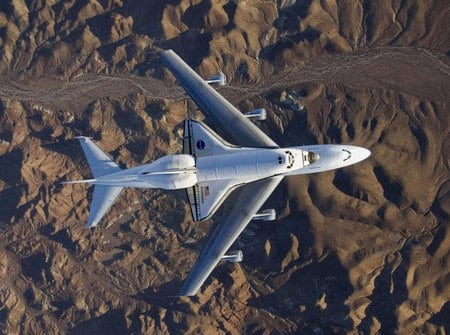 NASA snapped this very cool shot of the Space Shuttle Endeavor piggybacking on a 747 over the Mojave Desert on December 10.

The space agency is putting the shuttle fleet up for sale when it is retired in 2010:

“The advertised price is just the starting figure for any one of the orbiters Discovery, Atlantis or Endeavour, which between them have flown 86 missions into space since 1984. Included is the minimum $6m cost of stripping a shuttle of toxic and other hazardous materials, preparing it for travel and flying it to an airport of the buyer’s choosing. As an agency of the US government, Nasa insists it won’t be selling its most prized assets to just anybody. So far, it is approaching only educational institutions, science museums and “other appropriate organisations” to gauge interest and assess the size of their chequebooks. ‘Nasa is keenly aware of the essential value of these key assets to the space programme’s rich history,’ an official says in a ‘request for information’ document that seeks ideas for the public display of the shuttles after their retirement…Only US citizens will be eligible to purchase and display the shuttles, which will be sold with all space-worthy fittings and fixtures except the main engines. Interested parties must promise to display the spacecraft in a climate-controlled indoor location.”