Melissa Etheridge On Rick Warren: We Need To Speak Our Own Truth - Towleroad Gay News

Melissa Etheridge appeared on Michelangelo Signorile’s radio show yesterday, and discussed Etheridge’s embrace of anti-gay Pastor rick Warren following news that he was going to be giving the invocation at Obama’s inauguration, as well as the anger from activists who felt she was undermining their message: 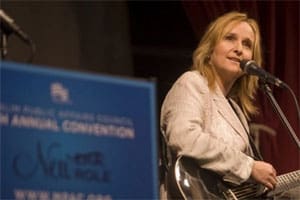 “I am sorry if they felt like in any way I undermined them. I truly believe everyone has their perspective and position on this. I’m glad for the activists who say this is not right to include someone who has spoke very poorly about a community that got this man elected…I also know I had this experience that I had to speak about…I think the best thing I can do for the gay community is speak my truth and say this is what happened to me…We should hold people accountable. Now, does that mean they are exiled from what we are trying to accomplish here, which is a united America? Or do we say, we see you now? You can’t be part of this party and hide that. I really want people to know that I’m not defending him. Okay, you now (sic), again, it’s such a fine line. And I, in my path and where I’m at, believe that we accomplish more by being present, by being out and open and saying you can no longer do this and we are all in this together. You got up and gave the invocation in front of two million people who wanted change and you are now held responsible. I think change happens when you include, not when you exclude…”

Listen to the whole interview at Signorile’s site The Gist.