Boy George, who this week was spotted looking haggard and defeated leaving his London home, was today sentenced to 15 months in prison for false imprisonment of male escort Audun Carlsen. 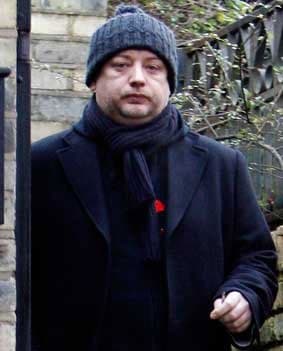 “During the trial at Snaresbrook crown court, the jury was told that O’Dowd invited Carlsen into his bedroom after a naked photo session during which they took cocaine. He then ambushed him together with the help of an unnamed man. Carlsen said the atmosphere changed when O’Dowd returned to the flat after ostensibly popping out to buy milk and cigarettes. The altercation apparently stemmed from O’Dowd’s belief that Carlsen had attempted to hack into his computer. O’Dowd told him: ‘Now you’re going to get what you deserve.’ Carlsen said he was then beaten and handcuffed to a wall fixture. When O’Dowd returned to the room with a box of leather straps, chains and sex toys, he said: ‘Now you’re going to get it.’ Carlsen told the jury he only escaped after wrenching the fixture free, but was beaten with a chain by the singer as he fled into the street in Shoreditch, east London. In an apparently accidental allusion to Culture Club’s 1982 No 1 hit; Heather Norton, for the prosecution, asked the jury during the trial: ‘Did he really have to hurt him?’ After the guilty verdict, O’Dowd was warned by the judge, David Radford, that he could expect a jail sentence. ‘This is a case where custody is the more likely option,’ he said.”

GEORGE: CARLSEN ‘STITCHING ME UP’ 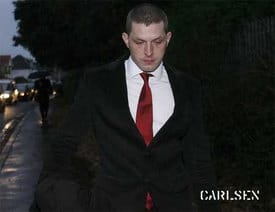 Yesterday, the Mirror reported that George refused to testify in his own defense in the trial to save his mom the heartache of hearing about it: “His brother David said the troubled star told him: I know the likelihood is Im going to prison, but I couldnt do it for mums sake. Shes dying. The only reason I didnt give evidence was for her. Shes been through too much in her life already. David claimed he told him: [Carlsen] is stitching me up because of the money he knows he can make. Ill probably get sent down for this even though Im innocent. But that doesnt matter. What matters is Im clean and Im sober. The only reason I didnt give evidence in court was because I didnt want put Mum through any more pain.” 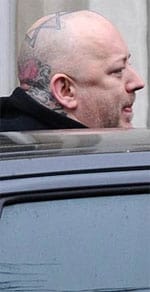 The Times adds: “Because of the conviction, the Eighties star will probably no longer be able to perform in Japan or America, where he has large fan bases, the court heard. Indeed, two fans flew over from New York and Canada to sit in a packed number 1 court to listen to proceedings along with 20 friends and family of O’Dowd. Today O’Dowd sat motionless in the dock, in between two guards, wearing a black duffel coat and black hoody…Mr Waterman told Judge David Radford today: ‘I ask you to sentence him on the basis that he did genuinely believe what he told the police – namely that Mr Carlsen had stolen photos from his computer and willingly or unwillingly interfered with his computer and was about to do something similar again.’ The barrister told the court that during the trial last year a friend of the singer had said that the case sounded like ‘two drug crazed idiots’. ‘I venture to submit there is a good deal of truth in that observation,’ he said. Mr Waterman went on: ‘I recognise the use of prescribed substances provides no mitigation to those that have tasted riches and fame or anyone else.’ He said that although O’Dowd had descended ‘into self destructive behaviour at the hands of drugs’ there was a hope that was in the past.'”

George, in happier times, AFTER THE JUMP…