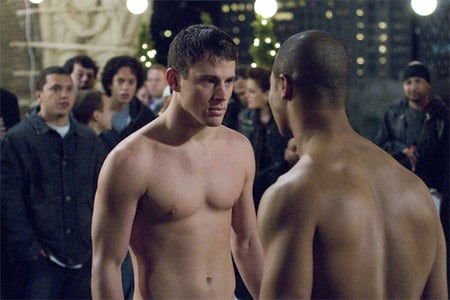 Channing Tatum looks as if he doesn’t know whether to punch his opponent or kiss him, in a new image from Dito Montiel’s upcoming (April) film Fighting, in which Tatum plays small-town boy Shawn MacArthur, who comes to New York with nothing (quite literally, it appears).

The film’s description from Rouge Pictures: “Barely earning a living selling counterfeit goods on the streets, his luck changes when scam artist Harvey Boarden (Terrence Howard) sees that he has a natural talent for streetfighting. When Harvey offers Shawn help at making the real cash, the two form an uneasy partnership. As Shawn’s manager, Harvey introduces him to the corrupt bare-knuckle circuit, where rich men bet on disposable pawns. Almost overnight, he becomes a star brawler, taking down professional boxers, mixed martial arts champs and ultimate fighters in a series of staggeringly intense bouts. But if Shawn ever hopes to escape the dark world in which he’s found himself, he must now face the toughest fight of his life.”

One more shot of Tatum and Howard, AFTER THE JUMP… 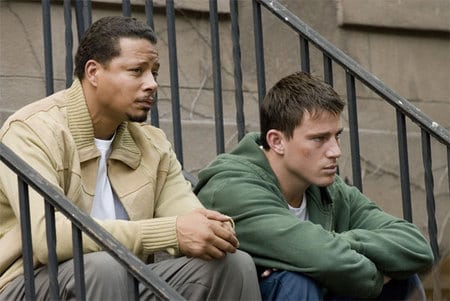