On Monday, I posted a video of Samuel “Joe the plumber” Wurzelbacher, who is now in Israel working as a war correspondent for a conservative media outlet. Wurzelbacher had some words on the freedom of the press. 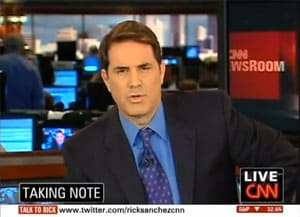 Said Wurzelbacher “”I’ll be honest with you. I don’t think journalists should be anywhere allowed war. I mean, you guys report where our troops are at. You report what’s happening day to day. You make a big deal out of it. I think it’s asinine. You know, I liked back in World War I and World War II when you’d go to the theater and you’d see your troops on, you know, the screen and everyone would be real excited and happy for ’em…I think media should be abolished from, uh, you know, reporting. You know, war is hell. And if you’re gonna sit there and say, ‘Well look at this atrocity,’ well you don’t know the whole story behind it half the time, so I think the media should have no business in it.”

Yesterday, CNN’s Rick Sanchez trashed Wurzelbacher, in the most satisfying CNN rant since Jack Cafferty called Sarah Palin’s answers in Katie Couric’s interview “the most pathetic” piece of tape he had ever seen.