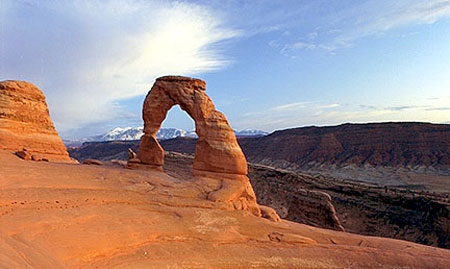 “The effort is a collection of five bills, aimed at the upcoming legislative session, that would provide legal protections to same-sex couples, such as hospital visitation and inheritance rights, and forbid discrimination against gay and transgender people in employment and housing. Equality Utah also is lobbying leaders to extend health-insurance benefits to the domestic partners of state employees. Delicate Arch is ‘an important symbol for all Utahns,’ said organizer Michael Mueller, founder of the Facebook community Utahns for Marriage Equality. ‘We’re all Utahns first — gay, straight, whatever.’ … Speakers will include Salt Lake City Democratic Rep. Christine Johnson, who is sponsoring a Common Ground bill; Claudia Bradshaw, founder of the St. George chapter of PFLAG (Parents, Families and Friends of Lesbians and Gays); and Matthew Landis, a Salt Lake City hairstylist and activist.”

The Park Service has issued a permit for the rally (allowing signs and banners but not bullhorns) and say though it’s not unprecedented to have one in the park, they haven’t issued a permit in a couple years.

Since this rally is obviously symbolic and not accessible to large numbers of people, I hope they’ll send us some photos.

Info about the march, directions, etc, AFTER THE JUMP…

A rally in support of legal protections for gay couples