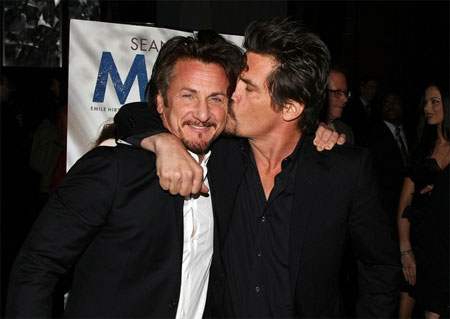 The Hollywood Reporter‘s Steven Zeitchick reports on some of the goings-on at he New York Critics Circle Awards at NYC’s Strata, where Milk was honored with Best Picture last night. Awards list here.

Above, Best Supporting Actor Brolin gives Best Actor Penn a sweet peck on the cheek for the cameras. 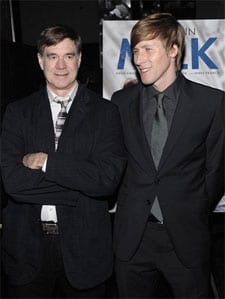 “Again Brolin, after chiding Sean Penn for the actor’s self-seriousness (or was he chiding those who chided Penn for his self-seriousness? So hard to tell) had a whole riff, said in a deadpan voice. with theatrically long pauses: ‘Quite an actor Sean Penn, quite an actor. [Pause] Amazing. [Pause] And now I’m an asshole. Like Russell Crowe. Because I’m not as smart as Sean. [Pause] Quite an actor. [Pause] Amazing actor. I’ve loved you in Milk, I thought what you did with that role was incredible. We’ve known you as an actor who doesn’t smile very much. And the fact that you smiled as much as you did in this film is amazing. Truly incredible. You are an amazing actor. You are going to get the Oscar. Because you smiled so much.'”

“Penn got in his own good-natured (we think) digs at Brolin. ‘I always wrote him off as a handsome square jawed actor…There’s no one who’s as big a nightmare as him.’ And then, ‘No one has much endurance at night and as a little during the day.’ (Then he said he’s a great leading man, was one of the best experiences working with him, yadda yadda).”

Tony Kushner worked the bait and switch humor as he intro-ed ‘Milk’ as best picture. ‘I want to thank the thousand of gay faceless, nameless people…who were hired to write a screenplay about the life of Harvey Milk over the past fifteen years.’ He also thanked the ‘remarkable gay-straight alliance’ that…got ‘Milk’ made. “Gus Van Sant, Dustin Lance Black (pictured, right), Dan Jinks and Bruce Cohen. They’re the gays. James Schamus and the actors — those are the straights. Give or take some of the actors.”

More at THR, including Brolin’s slam of critic Ben Brantley.

Previous Post: « Equality Activists Seek Arch Support to Get Message Out in Utah
Next Post: AG Jerry Brown at Center of Flurry of New Briefs in Prop 8 Case »