With regard to confusion about Rep. Kirsten Gillibrand’s positions on LGBT issues, Towleroad has received a clarification from the Human Rights Campaign: 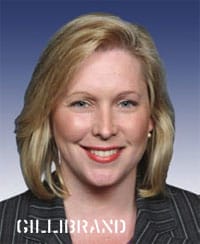 “There has been some discussion about the record of Kirsten Gillibrand, New York Governor David Paterson’s pick to replace Hillary Clinton, regarding her stance on Don’t Ask Don’t Tell and additional LGBT issues. In particular, we’d like to clarify references to the Human Rights Campaign Scorecard for the 110th Congress. Although Kirsten Gillibrand did not co-sponsor legislation to repeal DADT, non-cosponsorship does not mean support for the policy or opposition to repeal. In fact, in conversations with her office the Human Rights Campaign has confirmed Gillibrand is in favor of repealing Don’t Ask Don’t Tell and supports full marriage equality for gay and lesbian couples.”