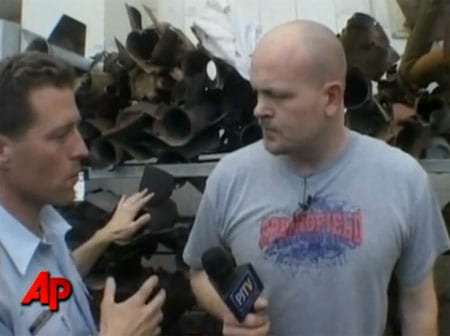 Joe the Plumber’s latest words of wisdom upon arriving in Israel as a foreign war correspondent: the media should be abolished from reporting on wars because they really have no idea what’s going on.

Said Wurzelbacher: “I’ll be honest with you. I don’t think journalists should be anywhere allowed war. I mean, you guys report where our troops are at. You report what’s happening day to day. You make a big deal out of it. I think it’s asinine. You know, I liked back in World War I and World War II when you’d go to the theater and you’d see your troops on, you know, the screen and everyone would be real excited and happy for ’em…I think media should be abolished from, uh, you know, reporting. You know, war is hell. And if you’re gonna sit there and say, ‘Well look at this atrocity,’ well you don’t know the whole story behind it half the time, so I think the media should have no business in it.”