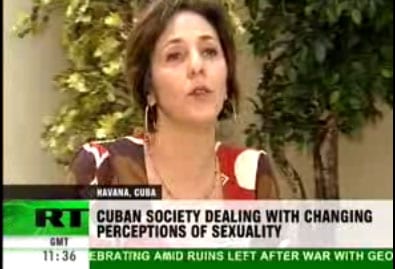 Russia Today has posted an informative and comprehensive interview with Mariela Castro, daughter of the nation’s President Raul, and Director of the National Center for Sex Education in Cuba.

The interview covers the possibility of same-sex unions in a predominantly Catholic, Communist state, overcoming stigmas and legislative barriers, when a bill might be passed legalizing same-sex unions in Cuba, the country’s history of homophobia, HIV/AIDS, and the support she receives from Raul Castro of her work on sexual education.

Said Castro on the latter topic: “Yes, he’s supportive of my work, thanks to the past influence of my mother, on sexual education, and mine. Of course, from time to time we have discussions meant to convince him of the need for quicker solutions. He’s also influenced by other people that disagree with my work, and it’s those people who create obstacles. But I believe that dialogue is fundamental to progress, so whenever I have a chance to sit down and talk with my father to convince him, I do so.”

Watch the entire interview, AFTER THE JUMP…