Michael Steele, the former Lieutenant Governor of Maryland, has been elected chair of the Republican party. He is the first African-American to hold the position. I posted briefly about Steele earlier this week after allegations surfaced that rival RNC Chair candidate Saul Anuzis had attempted to smear Steele by forwarding GOP members an email from the Log Cabin Republicans praising Steele, thus casting him as a moderate. 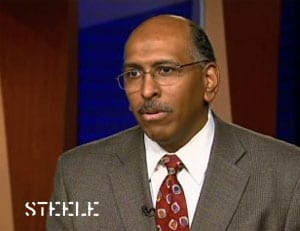 While Steele is generally seen as more moderate than the other candidates that were up for the leadership position, there is some recent evidence of his positions on LGBT issues.

In December, he said he’d toe the party line if a federal marriage amendment ever came up even though he is personally against it: “As chairman of the party, it is in the platform. We will support it and if members of Congress introduce the bill, then we will be the advocates for that legislation. Personally, I do not like messing around with the Constitution. I really don’t and I’m conflicted by it and I really appreciate the idea of wanting to put something like that, same with the pro-life issue, same with gay marriage but I really believe we are a federal government.”

As Lt. Governor of Maryland in 2006, he told religious leaders that marriage is between one man, one woman, and God: “Marriage is not a purely human institution. Marriage defines not only the relationship between a man and a woman but also their journey through life. They should not be brow-beaten into thinking something that goes counter to what the people in the community aspire to.”

And in 2005, Steele appeared at a ‘Defend Marriage’ rally, saying, “We are here to affirm that marriage is only between a man and a woman. We need to make it clear where Maryland stands.”

Log Cabin President Patrick Sammon praised the selection of Steele: “Michael Steele is the right man at the right time to lead the GOP. It’s a great day for our Party. Steele is an inclusive leader who will bring a new energy and a new vision to the GOP at a critical time.”

Watch the announcement of Steele’s chairmanship, AFTER THE JUMP…