Michelangelo Signorile spoke with escort Mike Jones on his show yesterday. Jones told him that he knows of two other men at New Life Church who had similar experiences as Grant Haas, the church volunteer who most recently came forward. Jones posted a YouTube video on Monday saying he knew there were others. 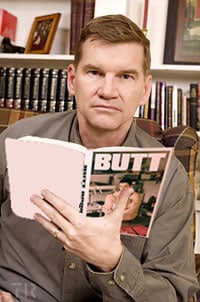 Said Jones to Signorile: “The interesting thing about all of ’em is that all of ’em went to the church or Ted Haggard regarding their homosexuality, not sure how to handle it, or what to do with it. That’s what all three of these have in common.”

Watch a short clip of Signorile talking to Jones, AFTER THE JUMP…

The Trials of Ted Haggard, the HBO documentary made by Alexandra Pelosi, premieres on HBO Thursday. The L.A. Times did a Q&A with Haggard and asked him about the film, and about where he is now in “wrestling with the issue that led to [his] departure from the church.”

Said Haggard on that: “I am very pleased with where I am now. I have an incredibly satisfying relationship with my wife, and I no longer have the compelling and obsessing thoughts attached to same-sex attraction that I used to. So I’m very pleased. I think I’ve met myself more and I’m a healthier person…I don’t know what will always be a part of me, but I know they are no longer compelling, they are no longer compulsive, not even strong. Once in a while, I’ll have a thought. I think it’s just like a person’s thought about whether or not they should — you know, it’s just an intellectual debate now inside of me from time to time, or an intellectual decision from time to time, rather than a compelling drive or urge. And that’s what I used to wrestle with…What my therapist says is that I am a heterosexual with issues, and I think that’s accurate.”

Haggard is also scheduled to appear on Oprah today and Larry King Live Thursday night. Questions for Haggard are being accepted by CNN.

NOTE: Photoshopped illustration a satire, in case anyone, aside from Haggard, is confused.

Watch Signorile’s clip, AFTER THE JUMP…