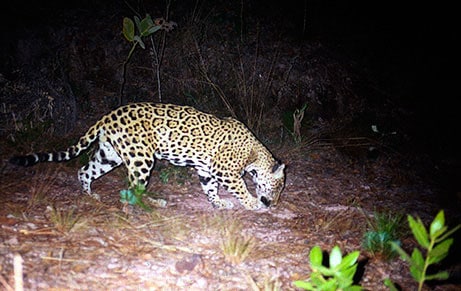 A jaguar has been photographed in the wild in Mexico, the first time the cat has been seen there in 100 years:

“Jaguars have disappeared from much of Mexico as humans have chopped up their habitat and sometimes killed the animals for the illegal wildlife trade. Concerned that the big cat was locally extinct, an expedition team set out into the 260 square mile (674 square kilometer) reserve between 2002 and 2004. The team talked to villagers within the study area, but no one had reported seeing the elusive animal. That may be because the cats, which were photographed at 6,053 feet (1,845 meters), are forced by their diminishing habitat to travel across higher ground, said study leader Octavio Monroy-Vilchis of the Autonomous University of the State of Mexico.”