Cleve Jones appeared on The Rachel Maddow Show to discuss whether or not the Lance Black and Sean Penn Milk Oscar wins will make a difference in the fight for marriage equality, speaking first about the religious extremists who perpetuate violence against gays by exploiting their various faiths: 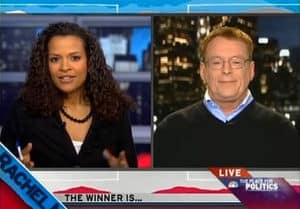 "Ithink Harvey Milk would be enormously proud of it. I knew Harveywell. I‘ve come to know Sean and Dustin Lance Black very well. I‘m soproud of them. Butyou know, when I was listening to Lance speak in particular, I wasthinking about all the young people who, right now, are contemplatingtaking their lives because they know that they are different from otherpeople. And Ithink that that‘s one of the great tragedies that‘s often lost in thepolitical debates. And when we see the Republicans and the preachersexploiting that, the consequence of those words is so often violencedirected against gay people from the outside and also the deaths ofmany young people who fear the future so terribly. So I thought that those were life-saving speeches and I‘m very, very grateful to them both."

Jones also expressed hope that equality for all Americans would soon be a reality:

"Youknow, I think that for too long, we have accepted this failed strategyof allowing our rights to be debated state by state, county by county,city by city.  We‘ve settled for compromises for far too long.  We‘vesettled for fractions of equality. AndI think that that is going to end.  And we‘re now going to insist onfull equality, equal protection under the law in all areas governed bycivil law in all 50 states. AndI hope people see this film and are inspired by what we did in SanFrancisco in 1978.  But for strategy, I think people need to look backto 1964 when it became clear to the great leaders of the civil rightsmovement that many of the southern states and many others probablywould never willingly extend equal protection under the law to theAfrican-Americans. Itwas then that President Johnson and the Congress passed the CivilRights Act, extending equal protection under the law in all areas ofthe country.  That‘s what we need today.  That‘s what we‘re callingupon the leaders of Congress and Barack Obama to do."