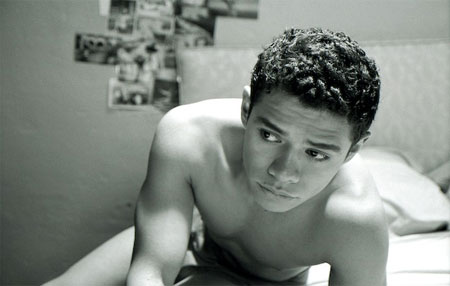 The jury statement, via Band of Thebes: “We award the Teddy for best feature to the Mexican film Raging Sun, Raging Sky for its masterful cinematography and its visionary use of color and sound – for its explorations of love, desire and sexuality within the framework of ancient mythology, juxtaposed with modern urbanity.”

The other winners were John Greyson’s documentary Fig Leaves, and Barbara Hammer’s short film A Horse is Not a Metaphor. More on those at Band of Thebes. John Hurt won the Teddy Awards’ first-ever acting award for his portrayal of Quentin Crisp in An Englishman in New York, and Warhol icon Joe Dallesandro won a lifetime achievement award.

A clip of Rabioso Sol, Rabioso Cielo, which is not embeddable, can be viewed here.

The winner of the Golden Bear at the Berlinale was Claudia Llosa’s La teta asustada” (The Milk Of Sorrow) “about a woman haunted by the abuse suffered by her mother” according to Variety.