In a recent interview with Sway on MTV, Kanye West says that “straight men need to take the rainbow back” and responds to detractors who say that he “dresses gay.” 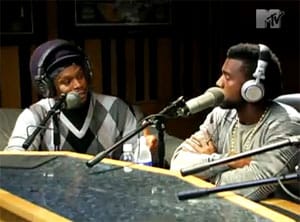 Said Kanye: “Well, it’s like when people say, ‘Give me a natural pose.’ You can’t pose natural. If you’re posing, then it’s not natural no more. So it’s statements that people say. ‘Dressing gay’ you can’t dress like … Your dress don’t give away whether or not you like a man. Think about actors that straight dress up like a woman or something like that. People wanna label me and throw that on me all the time, but I’m so secure with my manhood. And that’s the reason why I can go to Paris, why I can have conversations with people who are blatantly gay. ‘Cause I used to be scared to talk to a gay person. It’s designers that’s scared of people in hip-hop. And in hip hop, there’s people — and let’s not even say scared like homophobic — but they’re scared of the way people gonna look at them. If you see a person be like, ‘I don’t wanna stand next to Marc Jacobs ’cause I don’t want that to bear on me because I’m just so cool.’ One of the reasons why, the perspective I come from with my raps and my songs, the reason why can’t nobody dis me — no gangsta rapper, nobody can really dis me is ’cause it’s so authentic.”

Sway also asks him about this photo of Kanye and his posse in Paris: 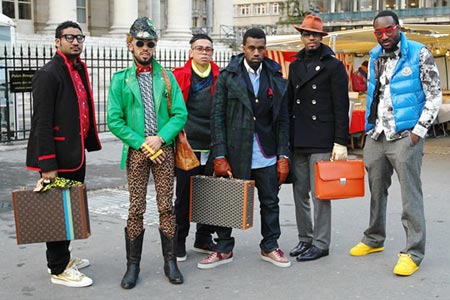 Answers Kanye: “I’m gonna tell you something about the Paris pic. They was like, some of the people dressed in the outfits, I didn’t check out everybody’s outfit that hopped in the picture with me — I can’t be completely responsible. You go right into my outfit, my outfit is good…I’m doing a blog right now where I’ve been collecting all of the freshest stuff that’s rainbows — Denver Nuggets jerseys, BAPE shoes, Nikes with rainbows on ’em — and saying, ‘Man I think as straight men we need to take the rainbow back because it’s fresh.’ It looks fresh. I just think that because stereotypically gay people got such good like style that they were smart enough to take a fresh-ass logo like the rainbow and say that it’s gonna be theirs. But I was like ‘Man I think we need to have the rainbow’ — the idea of colors , life and colors and stuff, I mean how is that a gay thing? Colors? Having a lot of colors is gay?”

Rainbow flag designer Gilbert Baker will no doubt be happy about that quote.

Finally, Kanye discusses an old video clip that surfaced last month in which he says he gets his style from gay people.

Watch the interview with Sway, AFTER THE JUMP…

You may have missed…
Kanye West to Fans: Don’t Use the Word ‘Fag’ [tr]