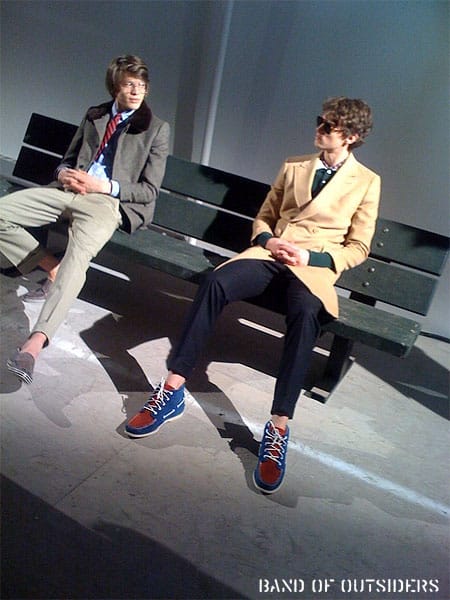 Andrew Harmon has been roving among the shows at New York’s Mercedes Benz Fashion Week for Towleroad. Harmon is the former West Coast Editor for DNR/Menswear and a contributor to Los Angeles, The Advocate and Women’s Wear Daily. Here’s his initial report.

In an airy SoHo fashion presentation last weekend, 33 models all took turns at artful disaffection. They slouched on park benches. They loitered next to expired parking meters or ignored unfinished games of backgammon. One stood in an antique phone booth and gazed blankly at the scuffed receiver. “Probably waiting for a call from the unemployment office,” the Tom Ford-clad gentleman standing next to me quipped as he snapped his gum. 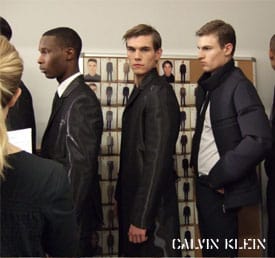 Welcome to New York Fashion Week, now a reluctant harbinger for what may be the great purge of ailing American labels.

Thom Browne’s hometown productions have been exported to Milan this season, fashion magazines continue to hemorrhage jobs, labels like Obedient Sons and Daughters have hung “Be Back in Two Years” signs on their design office doors, and an industry crowd awaits the revelatory but exits many men’s shows looking, well, Xanaxed. The accompanying music did little to quell the paranoia, what with pianists banging through Brahms cadenzas on out-of-tune uprights and shrill recordings of minimalist string quartets piped over collections destined for the Barneys New York Barker Hangar sale in Santa Monica. That’s if they make it to production.

To be sure, credit is due for any label with a show-must-go-on mentality, particularly amongst the emerging set. And unlike several European designers, most here focused more on what they do best — aspirational sportswear — rather than on fuzzy social commentary. Contrast that with condescending proletarian themes at Prada and environmental clichés at Versace, which showed images of melting glaciers in a move straight out of the Edina Monsoon playbook of runway production (“Bubble, I want four huge video screens down either side of the catwalk. I want to flash up pictures of sad-but-beautiful children, happy gay couples, slogans like ‘World Health!’, ‘No Pollution!’, ‘Fashion Cares!'”) 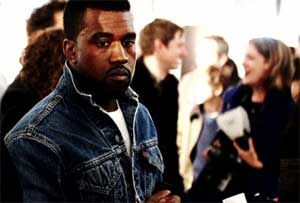 In New York, Band of Outsiders gave us models loafing among gorgeous things. But it also gave us hope. In the past I’ve been wary of this line — not because of its exorbitance or ultra-svelte proportions (Browne’s shrunken style maxim continueth), but because for at least a year, nearly every major men’s fashion spread was strangled by its $130 skinny ties, as though creative director Scott Sternberg had some backroom dealing with a cabal of stylists.

No matter: the Hollywood agent-cum-designer’s toggle coats, wool tuxedo jackets and impeccable oxford shirts fulfill even the most elaborate French boarding school fantasy. It was a thoroughly articulated vision of how his man should dress, and it was unsullied by economic jitters. You could tell Kanye West was taking mental notes as he worked the room. 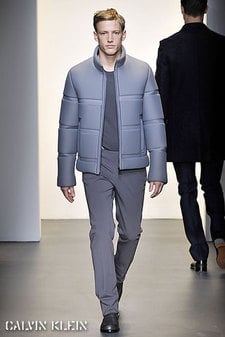 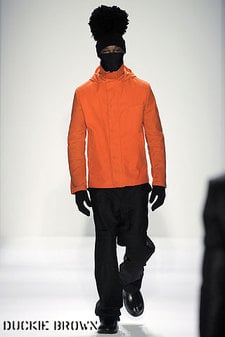 Elsewhere, dramatic outerwear appears to be designers’ salvation. At Calvin Klein, Italo Zucchelli showed some of the best specimens in his metallic collection, including a cobalt bomber that looked like it had been molded from spacesuit scraps. Duckie Brown’s superb waxed anoraks in blaze orange outweighed the hats with globe-sized puffballs, balanced on models’ heads like Rajastani women coming home from the market. I didn’t know whether to smirk or yawn. 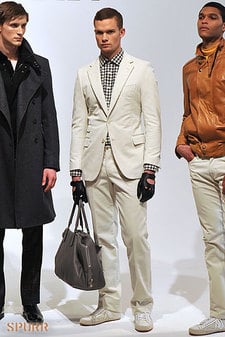 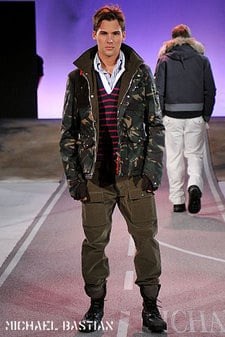 It would be unfortunate for the economy to claim legitimate talent along with the riff-raff. Simon Spurr’s eponymous line is among the former. A Ralph Lauren alumnus, his label is just getting started. The presentation notes cited 2001: A Space Odyssey as muse, but I pictured James Bond: The Undergraduate Years. Tailored, delicate puffy jackets in amber that hit perfectly at the waist, cashmere blend peacoats and peak lapel jackets in velvet would all make Miss Moneypenny blush and fantasize. After hours, of course.

I also hold out hope for Michael Bastian. Though I could have snoozed through two-thirds of his show, the second act was what I usually loathe in men’s wear but hoped to see anyways: wayward fashion. There were military jackets and oversize canvas bags, chunky knits with colorful teepees, suede peacoats with faded glory written all over them. In other words, gear destined for entitled city kids taking a cross-country trip in a VW bus that stalls somewhere along the way, someplace like Joplin, Missouri. It may have been the show’s devil-may-care styling. But it was hard not to extend a hitchhiker’s thumb in solidarity.

Video of the Duckie Brown show, AFTER THE JUMP…

Previous Post: « Pet Shop Boys and Lady GaGa to Perform Together at Brit Awards
Next Post: Kanye West: ‘That’s So Gay’ Should Be Used as a Compliment »