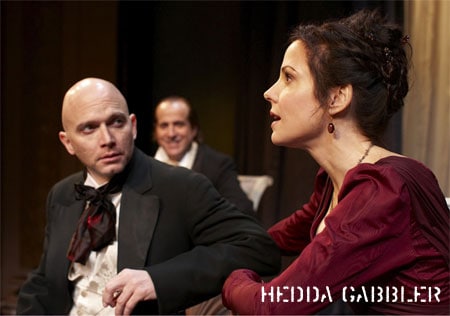 Kevin Sessums recently reviewed ‘Billy Elliot’, ‘Shrek’, ’13’, and ‘Prayer for My Enemy’ as well as ‘Back Back Back’ and ‘Farragut North’ for Towleroad. You can also catch up with Kevin online at his own blog at MississippiSissy.com. 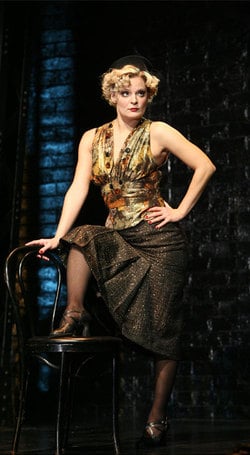 Before I begin, I’d like to address the controversy of my knowing some of the people involved in shows that I review. There were some pretty heated comments after my last posting regarding my mentioning I was friends with Shrek’s director, Jason Moore, as well as two of the founders of Dreamworks, the main producer of the musical. My ethics were called into question. I feel, however, it would have been unethical if I had kept those friendships a secret under the specific circumstances that arose for this production so was very clear in the review re: those friendships, opening myself up for the harshness of the comments that followed. After living in this city for 34 years and having good friends in the theatre community, I have often known people involved in many of the shows I cover for Towleroad. I have given bad reviews to some of them, good reviews to others. Additionally, this is not the New York Times. There is no second or third theatre critic to whom to hand an assignment when these issues arise.

One of the very first reviews I did for Towleroad was for Fuerzabruta which was produced by another good buddy of mine, David Binder. I was even a guest of his at that show on one occasion. I certainly was not kind to that. Some might even characterize that review as overly snarky and dismissive. Another example: I was in the first Tales of the City with Laura Linney, which didn’t make me pull my punches when I, for the first time, had to admit I thought she was giving a bad performance in the Roundabout’s production of Les Liaisons Dangereuses.

The Roundabout’s current two productions — Pal Joey and Hedda Gabler — have mostly been the recipients of critical opprobrium. I found Pal Joey more mediocre than bad and am in the minority regarding my opinion of Hedda, which I found rather brave in its utter outlandishness. Indeed, I haven’t found one friend who agrees with me about Hedda. It seems to be universally hated. 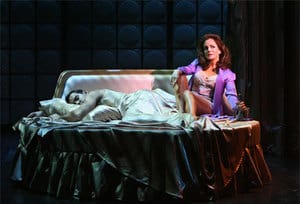 First Pal Joey. It is the most famous of Rodgers and Hart musicals and is based on a series of The New Yorker short stories written by John O’Hara which tells the sweet yet sordid saga of Joey Evans, a Chicago gangster-era gigolo. Richard Rodgers himself once said that Joey wasn’t “disreputable because he was mean, but because he had too much imagination to behave himself, and because he was a little weak.”

Richard Greenberg has refashioned the John O’Hara book for the 1940 musical, a book that was “influenced” by the show’s first director, George Abbott, during the show’s out of town tryouts when O’Hara was absent — which was most of the time. Greenberg adds a gay subplot to the book and most notably deletes the female reporter from Act II — Melba — who was portrayed by Elaine Stritch in the show’s premiere. For those of you who saw her one-woman show on Broadway, you must remember Stritch’s breakneck anecdote about singing “Zip,” her showstopper from the musical. Greenberg has now combined the character with Gladys, the hard-knock chorine, originally played by June Havoc in the 1940 production. Havoc, now 95, is Gypsy Rose Lee’s little sister and the real Baby June of Gyspy fame. The role of Gladys has now been taken over by the brilliant Martha Plimpton (above, right). She steals the show and I kept thinking in twenty years she’d make a great Mama Rose in, yes, yet another revival of that show I’ve always wondered if Havoc must secretly hate. 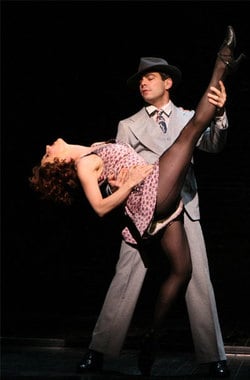 The role of Joey was originated by Gene Kelly. Others who have played him are Bob Fosse, Peter Gallagher, Chris Chadman, and, in the 1957 film version, Frank Sinatra. There is a bit of a Shirley-MacLaine-as-Cinderella story to this production’s Joey getting the job. Matthew Risch was the understudy for Christian Hoff, who was first cast in the role until he sustained an injury during the previews and director Joe Mantello decided to go with Risch all the way. There is also a bit of a real gay subplot regarding Risch’s taking the role. He is openly gay and Joey’s stock-and-trade is his blatant heterosexuality. Gay men have had to watch avowedly straight men play gay characters over and over and over, so it’s nice to see an openly gay man play so blatantly a straight one. (Neil Patrick Harris has started a trend perhaps.) But, to use Rodgers’ phrase, Risch is a little weak where star quality is concerned. It is a fine performance — though not a great one. And Joey needs to wow an audience just as he so viscerally wows Vera, the society doyenne who beds and bankrolls him. Joey lives to seduce. It’s as effortless to him as breathing. Risch shows us too much of the effort.

In this production Vera is played by Stockard Channing. Others who have played her include Vivaca Lindfors, opposite Fosse; Patti Lupone, opposite Gallagher; Joan Copeland (sister of Arthur Miller), opposite Chadman; Rita Hayworth, opposite Sinatra. Sian Phillips of I, Claudius fame played the part in a 1980 West End production. Channing’s Vera never lets us forget she is slumming – or is that Channing herself who gives off such a feeling? Her rendition of “Bewitched, Bothered, and Bewildered” is filled with a woeful ennui, never a sexual hunger, which is the way I once heard it sung by Lena Horne in her one woman Broadway show back in 1980. She would have made a great Vera in her day. My mind would wander at times in this production and imagine Horne in the role – or, now that that’s not possible, an all African-American version reset in Harlem back during its jazz-age Renaissance. 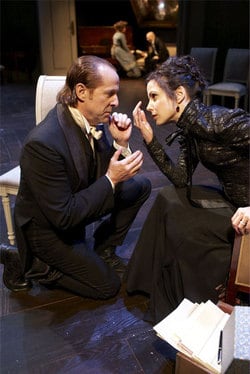 Now … ahem … Hedda. Here goes. I loved it. Was never bored. Felt assaulted at times. Laughed. Sat with my jaw dropped. Shook my head from time to time. Was floored by the audacity. Dumbfounded? At one or two moments. Moved? A qualified yes. “It will prove controversial.” I emailed a publicist for the show the next day.

Ibsen’s play, a critique of bourgeois society, was also lambasted by critics when it first opened in Germany in 1891. Director Ian Rickson, whose production of The Seagull was hailed earlier this year, seems to have turned over the play’s psychological rock to see what neurasthenic creatures scurry about beneath all the repressed Scandinavian emotions embedded in the text. It is a modern — even modernist — reading of the play that falls short of an all-out decontructionist take that the Dutch director Ivo van Hove took — with an aesthetic sledgehammer — to Hedda Gabler several seasons ago at New York Theatre Workshop in which Elizabeth Marvel gave a thrilling and unbridled interpretion of Hedda. It’s as if Rickson and his cast are giving us a parallel-universe Hedda. Ibsen, in his notes on the title character, wrote that “life for Hedda is a farce which isn’t worth seeing through to the end.” It is this raging farcical aspect of life that Rickson is tapping into. We are witnessing what Hedda is repressing. This is who she is inside her head. This is the view of life she is really seeing. It is dreamily nightmarish. And, indeed, Rickson opens the play with a tableau of Hedda asleep with her gown thrust above her naked loins so that she is literally mooning the audience, which I took as a sign of things to come, as I did her also literally throwing the dust covers off the furniture of the house when she awakes as if to warn us that this will be no usual antimacassared Ibsen production. 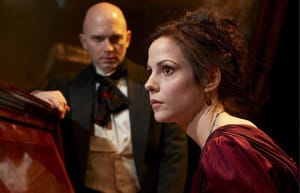 Mary Louise Parker, as Hedda, is so downright feral that she resembles a Minnie Mouse off her meds channeling that other Minnie, the great Ibsen interpreter of the early 20th Century, Minnie Maddern Fiske. Parker is fiercely petulant throughout. And as sexually hungry as the bewitched, bothered and bewildered Lena Horne back in 1980. I was certainly bewitched by her. But the New York Times’s theatre critic, Ben Brantley — an old friend and colleague who was two seats away from me — seemed only bothered and bewildered. He squrimed and scribbled and squirmed some more. I could sense — rightly so, judging by his later pan of the show — he was loathing a production that was proving, at times, laughable to him. I instead was getting swept up in the production’s anarchic take. Its nasty aplomb. Its rudeness. Its taunting. When Mary Louise Parker took her bow I shouted “Bravo!” just to see if Ben would flinch. He did. And that, I thought, is what Ibsen demands, this flinching as he flouts the flinchless among us.