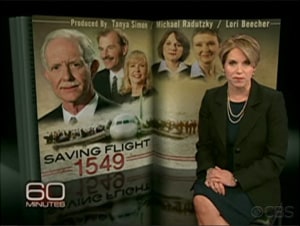 60 Minutes retold the flight of US Airways 1549 last night in interviews with Chesley “Sully” Sullenberger and his crew. The crew said they had no idea where they were coming down and that seeing water outside was a complete shock.

The most compelling testimony came from crew member Doreen Welsh, who was at the back of the plane. After being violently thrown around when the back end of the plane struck the water first, Welsh saw the cabin begin filling with water after a passenger ran to open the back door.

Said Welsh: “There was no doubt in my mind it was over. And I just went crazy and started yelling at people and pushing people and getting people to go over the seats…And as I was getting up I thought I might actually live. So my emotions had gone through, within seconds, accepting death and seeing life. It was unbelievable.”

Watch the entire show, AFTER THE JUMP…