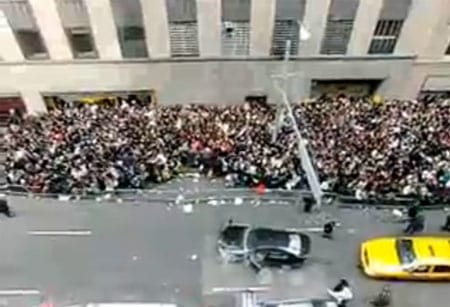 Line-jumpers apparently created outrage from hundreds of aspiring female models who had been waiting all night in line in midtown Manhattan (some were forced to "pee in cups" or lose their place in line according to NYDN) to audition for America's Next Top Model.

However, all hell broke loose when the black car you see in the photo above apparently overheated, and someone screamed "bomb." This caused a stampede and a brawl:

"Screaming as they ran for their lives, hundreds of hotties in heelstoppled over barricades along W. 55th St. after several people in thecrowd started yelling, 'There's a bomb!' By the time the modelmadness ended, six women were injured and two women and one man werebusted for inciting a riot, authorities said…A fight broke out between two men who had been taunting each other for several hours, witnesses said."

Of course, despite the chilly temperatures, many of the models were apparently passing out because they had probably starved themselves for weeks to achieve the waif-like physique that would get them plucked by judges from the masses.

Watch the hysteria, AFTER THE JUMP…