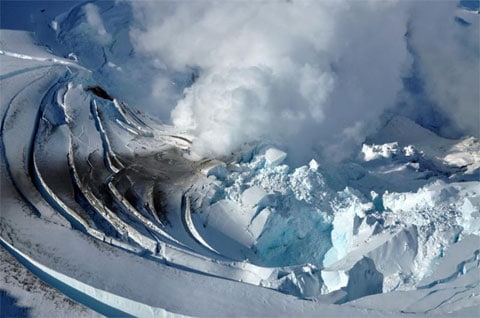 The shot above (courtesy of AVO/USGS) of the top vent in the Redoubt Summit Crater was taken on Saturday before the eruptions began.

"Mount Redoubt erupted four times three hours late Sunday and early Monday, and the Alaska Volcano Observatory says the most recent was the largest so far. 'Beginning at 10:38 p.m. (Sunday) night, we began to have explosive activity,' geophysicist John Power with the United States Geological Survey said. 'At this point we have recorded four separate explosive events. These events were very large, explosive eruptions of Redoubt Volcano.' An eruption cloud is estimated to be at 50,000 feet above sea level at present. The National Weather Service has issued an ash fall advisory for the cities of Talkeetna, Willow and Cantwell, effective until 8 a.m. Monday. Ash fall has been reported in Skwentna, and AVO says ash is still being emitted from the volcano. Predictions before the most recent eruption called for light ash fall and for it to miss Anchorage, but things can change rapidly."

Amateur vulcanologists can keep a better eye on it here. The latest news conference, from Alaska's KTUU, AFTER THE JUMP…