Junior high school teacher Chance Nalley invited the entire seventh grade class at Columbia Secondary School in Harlem, where he teaches math, to his commitment ceremony to another man. Two-thirds reportedly will be attending: 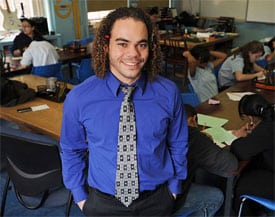 "…There have, however, been some questions. One student asked about
the legality of two men marrying. Mr. Nalley explained that New York
State does not, in fact, allow it, but that he was thinking of the
ceremony as a wedding celebration, if not a legal contract. When
another student asked why gay marriage was not legal in New York, Mr.
Nalley responded, 'I really don’t know.' … Four
seventh graders, approached at random on Friday, said they planned to
be there. Were they surprised to learn he was gay? 'He’s not gay,' said Japhet Guzman, 12. 'No,'
agreed a lanky 13-year-old who walked with a bit of a tough-guy
swagger, 'he’s not gay. He’s bisexual. Why don’t you ask him?' (Mr.
Nalley confirmed this.) Within hours of that diversity workshop last fall, the kids said, the whole school had heard the news about Mr. Nalley. 'I was really surprised,' recalled the 13-year old boy. 'It didn’t change anything about what we thought about him, though.' Raven Franklyn, another student, added, 'It showed he trusts us.' And they apparently trust him: Mr. Nalley said six students have come out to him this year…"

You may remember the first-grade field trip a group of kids in San Francisco took to see their teacher get married before Prop 8 was passed which 'Yes on 8' supporters quickly labeled "indoctrination." There's been little to no similar uproar here.