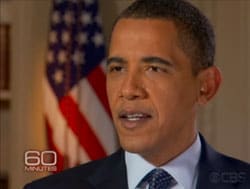 Obama appeared on 60 Minutes last night to discuss a variety of topics, among them the AIG bonuses.

Meanwhile, skepticism abounds on the bank plan. Economist Paul Krugman panned the Geithner bank plan: "Why am I so vehement about this? Because I’m afraid that this will bethe administration’s only shot — that if the first bank plan is anabject failure, it won’t have the political capital for a second."  And Frank Rich wondered: Has a "Katrina moment" arrived?

Obama also took on Dick Cheney and his assertion that new policies on Guantanamo Bay and prisoner treatment were making America more vulnerable.

Said Obama: "I fundamentally disagree with Dick Cheney. Not surprisingly. Youknow, I think that– Vice President Cheney has been– at the head ofa– movement whose notion is somehow that we can't reconcile our corevalues, our Constitution, our belief that we don't torture, with ournational security interests. I think he's drawing the l– wrong lessonfrom history. The facts don't bear him out. I think he is– that attitude, thatphilosophy has done incredible damage– to our image and position inthe world. I mean, the fact of the matter is after all these years howmany convictions actually came out of Guantanamo? How many– how manyterrorists have actually been brought to justice under the philosophythat is being promoted by Vice President Cheney? It hasn't made ussafer. What it has been is a great advertisement for anti-Americansentiment. Which means that there is constant effective recruitmentof– Arab fighters and Muslim fighters against U.S. interests allaround the world."

Watch the portion of the 60 Minutes interview on AIG, AFTER THE JUMP….

Click here to watch Part One and Part Two of the interview.