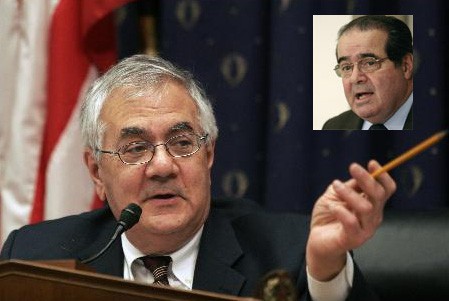 Barney Frank talked with WBZ news radio yesterday and defended his characterization of Supreme Court Justice Antonin Scalia as a "homophobe" in a recent interview with CBS News' Ross Palombo.

FOX News then attacked Frank for calling him that.

Said Frank to WBZ: "[Scalia's judicial writing] makes it very clear that he thinks gay people are a threat to the society — it's an angry, anti-gay opinion…What a 'homophobe' means is someone who has prejudice about gaypeople…..While I support same-sex marriage, I do not think if you're against ityou're homophobic…I don't think Clarence Thomasis a homophobe for an opinion which says, 'look the Constitution allows the state to do what I think is silly,' but what Scalia says, and I urge people to read his opinion, the case is Lawrence against Texas. Essentially, if you read Scalia's opinion he thinks homosexuals are a threat to society and that it is a pretty good idea to lock any of us up who engage in private in behavior that he disapproves of."

Listen to the WBZ interview, AFTER THE JUMP…

Previous Post: « Jim Carrey Too Convincing at Gay Sex for U.S. Audiences?
Next Post: Towleroad Guide to the Tube #453 »