Kathy Griffin Rails At Gay Marriage Foes: 'What The F*ck Is It To You?' - Towleroad Gay News 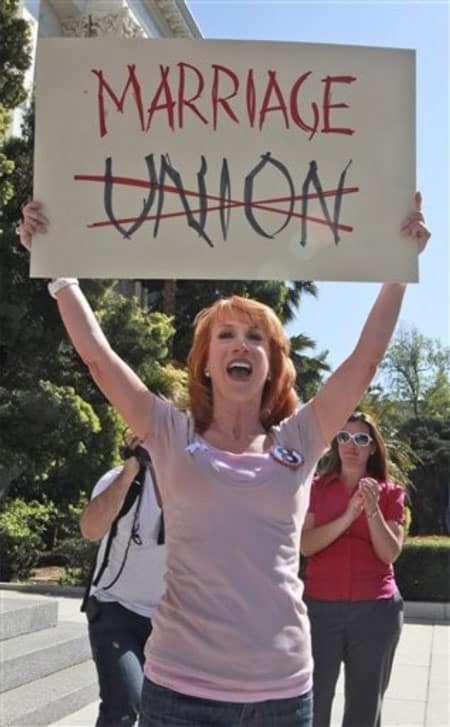 A Proposition 8 protest march which began Wednesday in Berkeley and began with 30-40 marchers finished up at theCalifornia State Capitol in Sacramento yesterday. The protestors, who numbered about 150 at the rally yesterday, received support from D-List comedienne Kathy Griffin, who showed up (with D-List cameras rolling) to condemn same-sex marriage foes as only she can. 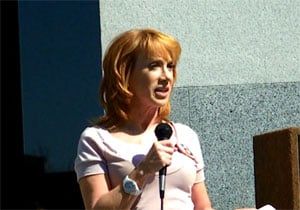 Said Griffin: "I've got a few questions for those who supported Proposition 8. My question is a very profound one. What the fuck is it to you?…Why are people in this state, when we have so many things on ourplate, we have a fiscal disaster going on, why does anyone even wastingtheir time with this issue? Why does anyone even care if gay people getmarried?…You would never in a million years go up to a person of color and say 'well, you know I hear that Black people want to get married now. I mean, it's fine if they live together." You would cringe, would you not? 'I hear that Mexicans want to vote! There goes the neighborhood!' Right? It would sound absolutelly silly. And yet, across the state, people are having dinner conversations saying, 'well, do gay people really have the right to get married?' Yes! Domestic union, domestic partnership is not the same."

Griffin then said she was channeling the spirit of Sally Field in Norma Rae, saying her friends call her "Norma Gay," and held up a sign with the word "union" (which Rae worked to organize)scratched out and the word "marriage" written above it. Brilliant.

Watch her almost 10-minute speech, AFTER THE JUMP…