Though it's been speculated about in the past, a marriage is apparently in the works for fashion designer Marc Jacobs. 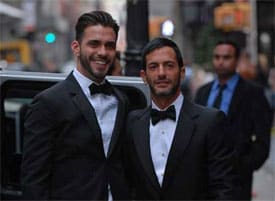 WWD reports: "Marc Jacobs and Lorenzo Martone are engaged. The designer and his ad
executive boyfriend, who have been together for about a year, will go
public with the news beginning Thursday, when they arrive in Brazil
wearing rings. The couple is headed to Martone’s native Sao Paolo
for a fete celebrating the Marc Jacobs multibrand store there, which
opened in January. They have not set a wedding date."

A source tells Towleroad that Jacobs was ebullient about the news at New York's David Barton Gym during a workout with his trainer earlier this week, telling folks, "I guess I'm getting married!" Our source also tells us that it was Martone who proposed to Jacobs.