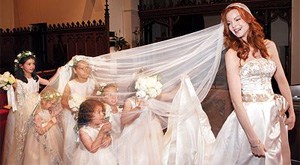 Desperate Housewives actress Marcia Cross tells Australia's Herald Sun she's glad she didn't get desperate enough to use her now husband as a shield when rumors began to circulate in 2005 (the rumor was traced back to a single anonymous post on an internet forum) that she was gay.

Said Cross: "I was seeing Tom when [rumors were circulating in Hollywood that she was gay], but I was not going to (name him) as proof of my sexuality. I
was annoyed. I thought, ‘That is nobody's business'. I was actually
proud of myself for not panicking and going, ‘I'm not (gay). Look. Here
is my guy'.''