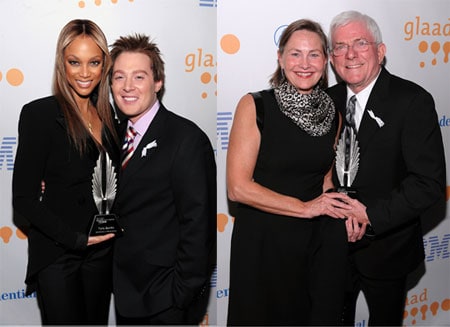 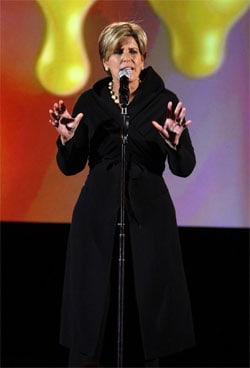 Said Orman: "I want every single one of you in this room to take note of whatcorporations put their time and money behind gays, behind lesbians –behind you. Do you want to continue to giveyour money to people in corporations that oppress us, that keep usdown? Or do you want to give your money to the corporations who canhelp us rise and change what needs to be changed in the United Statesof America today."

Said Donahue: "The majority of the people in the nation agree with us. Our job now is to summon these people to stand up and say so out loud. To tell them to join us." 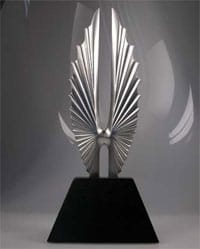 GLAAD also unveiled a new statuette for its winners. If you want specifics, it's 12 inches high, weighs 7 pounds, and is die-cast zinc, hand finished with a satin texture and plated with a custom nickel and rhodium finish for a dark luster, and comes on a black-stained ash base.

Fashion designer Jack Mackenroth filed a personal report on his blog, applauding GLAAD's choices of Suze Orman and Phil Donahue, though he had some critical thoughts about some of the other choices:

"I just really don’t understand why Tyra Banks was being honored.Because she has gay people on her show? Big deal. It’s about fashionand modeling. We are a dime a dozen in those industries. I may enjoywatching Mr. and Ms. Jay prance around the set of Top Model but I don’tthink they do anything to advance the LGBT cause. If anything theyperpetuate the idea that gay men are all over-the-top borderline dragqueens. Nothing against them personally. I just think GLAAD should diga little deeper. I also found it a bit offensive that Clay Aiken was making anappearance. He is another one who has been sending the message toAmerica that being gay is not OK. He does not represent me. There areso many talented, out, GLBT people that could have been chosen. I wastruly disappointed. Now I know that we need to align with our straight allies. I just think GLAAD needs to rethink some of their choices."

Finally, they'll arrive in San Francisco on May 9th to hand out another round.

Father Tony of The Bilerico Project filed a video report. You can watch it, and see the full list of award winners from this weekend's ceremony in New York, AFTER THE JUMP…

Outstanding Documentary
"A Jihad For Love"