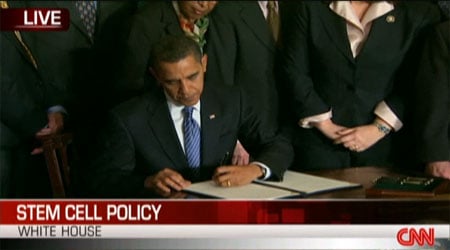 President Obama today signed an Executive Order lifting a Bush-era policy that limited federal funding for embryonic stem cell research, reversing a 2001 order that was widely criticized for placing politics over medical advancement. Bush twice vetoed legislation that would have expanded funding for such research. Obama also announced a Presidential Memorandum directing the head of the White House Office of Science and TechnologyPolicy to develop "a strategy [restoring] scientific integrity togovernment decision making." 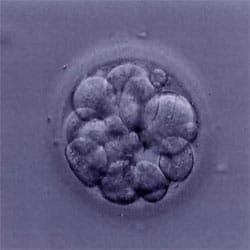 Said Obama: "In recent years, when it comes to stem cell research, rather thanfurthering discovery, our government has forced what I believe is afalse choice between sound science and moral values.  In this case, Ibelieve the two are not inconsistent. As a person of faith, I believewe are called to care for each other and work to ease human suffering.I believe we have been given the capacity and will to pursue thisresearch – and the humanity and conscience to do so responsibly."

The President also condemned cloning as a means of human reproduction, saying, "It is dangerous, profoundly wrong, and has no place in our society, or any society."

The Washington Post reports: "As supporters had hoped, Obama's order will come without any caveatsand leave the details to be worked out by the National Institutes ofHealth, which will have 120 days to develop guidelines that will beused to vet requests for federal funding for research. The guidelineswill address a host of thorny ethical issues raised by such research,such as how to obtain proper consent from donors of embryos used toobtain the cells."

Read the full text of Obama's remarks, AFTER THE JUMP…

Today, with the Executive Order I am about to sign, we will bring the change that so many scientists and researchers; doctors and innovators; patients and loved ones have hoped for, and fought for, these past eight years: we will lift the ban on federal funding for promising embryonic stem cell research.  We will vigorously support scientists who pursue this research. And we will aim for America to lead the world in the discoveries it one day may yield.

At this moment, the full promise of stem cell research remains unknown, and it should not be overstated.  But scientists believe these tiny cells may have the potential to help us understand, and possibly cure, some of our most devastating diseases and conditions. To regenerate a severed spinal cord and lift someone from a wheelchair. To spur insulin production and spare a child from a lifetime of needles. To treat Parkinson’s, cancer, heart disease and others that affect millions of Americans and the people who love them.

But that potential will not reveal itself on its own. Medical miracles do not happen simply by accident.  They result from painstaking and costly research – from years of lonely trial and error, much of which never bears fruit – and from a government willing to support that work. From life-saving vaccines, to pioneering cancer treatments, to the sequencing of the human genome – that is the story of scientific progress in America. When government fails to make these investments, opportunities are missed.  Promising avenues go unexplored. Some of our best scientists leave for other countries that will sponsor their work. And those countries may surge ahead of ours in the advances that transform our lives.

But in recent years, when it comes to stem cell research, rather than furthering discovery, our government has forced what I believe is a false choice between sound science and moral values. In this case, I believe the two are not inconsistent. As a person of faith, I believe we are called to care for each other and work to ease human suffering. I believe we have been given the capacity and will to pursue this research – and the humanity and conscience to do so responsibly.

It is a difficult and delicate balance. Many thoughtful and decent people are conflicted about, or strongly oppose, this research. I understand their concerns, and we must respect their point of view.

But after much discussion, debate and reflection, the proper course has become clear. The majority of Americans – from across the political spectrum, and of all backgrounds and beliefs – have come to a consensus that we should pursue this research. That the potential it offers is great, and with proper guidelines and strict oversight, the perils can be avoided.

That is a conclusion with which I agree. That is why I am signing this Executive Order, and why I hope Congress will act on a bi-partisan basis to provide further support for this research. We are joined today by many leaders who have reached across the aisle to champion this cause, and I commend them for that work.

Ultimately, I cannot guarantee that we will find the treatments and cures we seek. No President can promise that.  But I can promise that we will seek them – actively, responsibly, and with the urgency required to make up for lost ground. Not just by opening up this new frontier of research today, but by supporting promising research of all kinds, including groundbreaking work to convert ordinary human cells into ones that resemble embryonic stem cells.

I can also promise that we will never undertake this research lightly. We will support it only when it is both scientifically worthy and responsibly conducted. We will develop strict guidelines, which we will rigorously enforce, because we cannot ever tolerate misuse or abuse. And we will ensure that our government never opens the door to the use of cloning for human reproduction. It is dangerous, profoundly wrong, and has no place in our society, or any society.

This Order is an important step in advancing the cause of science in America. But let’s be clear: promoting science isn’t just about providing resources – it is also about protecting free and open inquiry.  It is about letting scientists like those here today do their jobs, free from manipulation or coercion, and listening to what they tell us, even when it’s inconvenient – especially when it’s inconvenient. It is about ensuring that scientific data is never distorted or concealed to serve a political agenda – and that we make scientific decisions based on facts, not ideology.

By doing this, we will ensure America’s continued global leadership in scientific discoveries and technological breakthroughs. That is essential not only for our economic prosperity, but for the progress of all humanity.

That is why today, I am also signing a Presidential Memorandum directing the head of the White House Office of Science and Technology Policy to develop a strategy for restoring scientific integrity to government decision making. To ensure that in this new Administration, we base our public policies on the soundest science; that we appoint scientific advisors based on their credentials and experience, not their politics or ideology; and that we are open and honest with the American people about the science behind our decisions. That is how we will harness the power of science to achieve our goals – to preserve our environment and protect our national security; to create the jobs of the future, and live longer, healthier lives.

As we restore our commitment to science, and resume funding for promising stem cell research, we owe a debt of gratitude to so many tireless advocates, some of whom are with us today, many of whom are not.  Today, we honor all those whose names we don’t know, who organized, and raised awareness, and kept on fighting – even when it was too late for them, or for the people they love. And we honor those we know, who used their influence to help others and bring attention to this cause – people like Christopher and Dana Reeve, who we wish could be here to see this moment.

Christopher once told a reporter who was interviewing him: “If you came back here in ten years, I expect that I’d walk to the door to greet you.”

Christopher did not get that chance. But if we pursue this research, maybe one day – maybe not in our lifetime, or even in our children’s lifetime – but maybe one day, others like him might.

There is no finish line in the work of science. The race is always with us – the urgent work of giving substance to hope and answering those many bedside prayers, of seeking a day when words like “terminal” and “incurable” are finally retired from our vocabulary.

Today, using every resource at our disposal, with renewed determination to lead the world in the discoveries of this new century, we rededicate ourselves to this work.

Thank you, God bless you, and may God bless America.