Lloyd Grove interviews Congressman Barney Frank in The Daily Beast today on a variety of topics. 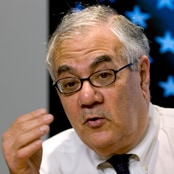 How does he feel about Larry Craig? "I feel sorry for him."

Why he hit out at Scalia's homophobia: "Oh, it became relevant. People were asking me strategically what Ithought, and I said I thought it was better that this [pursuing theconstitutionality of gay marriage] was going to be delayed with Scaliastill on the court. I have done so from time to time, when there werepeople acting out of what seems to me a bias, but only if it’s relevantto public policy. I’m not a commentator in general, and I do that whenit becomes relevant to a strategic or tactical decision."

And the reaction to his infamous rant with FOX News talker Bill O'Reilly: 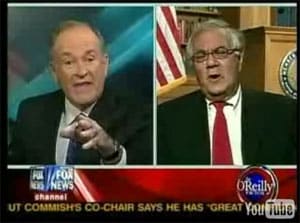 "Mostly I heard from people who were sympathetic to me. I do think inthat one he got somewhat damaged, and he did apologize for it a coupleof times, in an article and elsewhere. Part of it was incredulity. “Whywould you go on?” And I said, I think you don’t want to let thesethings go unrefuted. He’s not invited me back. Ten years ago, I might have reacted more angrily, but I really amable to kind of separate it out. I’m being attacked not because of mepersonally but as an obstacle to regulate. I just did a fundraiser. Isaid, OK, they need to get some money, they’ve got to refute some ofthese things. I’m being attacked by Ann Coulter, Rush Limbaugh, KarlRove—none of these people I respect. Finally to top it off, I was oneof the handful criticized by Dick Cheney in his post-vice presidentialinterview, and I said, my mother was wonderful woman, died three yearsago at 92, and I have missed her constantly. But I particularlywould’ve liked her to be around when Dick Cheney attacked me, because—Idon’t know how good your Yiddish is— she would’ve kvelled at the notionthat I’m still haunting Dick Cheney."

Incidentally, O'Reilly also recently commented on that segment in an interview with the Hollywood Reporter after they asked him "what's the angriest he's been" while on the air.

Said O'Reilly: "… the BarneyFrank thing (in which O'Reilly called Frank a 'coward' during anOctober debate over Fannie May and Freddie Mac). But I reallywasn't angry; I just needed to scold him because he was blamingeveryone else, even though some of this economic mess is his fault…That didn't backfire at all because I don't careif a congressman is re-elected or not. That's not my job. If peoplein his district like him, that's fine. I'm not trying to get himout of there, I'm trying to hold him accountable. That interviewwas seen by tens of millions of people, so I held him accountable." 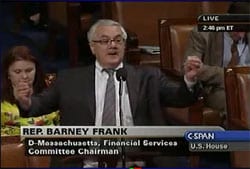 Frank delivered a slamdown of Republicans on the House floor yesterday over the Bonus Ban bill. The Huffpost writes: "The bill at issue, authored by Rep. Alan Grayson (D-Fla.), would capexecutive compensation at bailed-out financial institutions and it putsthe GOP in a tough spot: after expressing outrage over the AIG bonuses,it's tough to vote against the bill."

Watch Frank's rant, AFTER THE JUMP…