This Wednesday, in front of New York's Stonewall Inn, bar owners and Boycott Jamaica activists will take part in a "rum dump" to mark the launch of a boycott against Jamaica for its homophobic oppression. 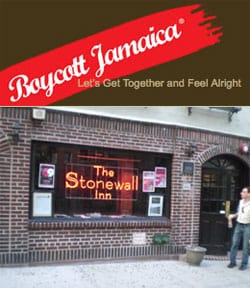 Organizers write: "The bar’s owners and boycott supporters will dump Jamaican liquor – Red Stripe beer and Myers’ Rum – down the sewer. Human rights activists have given Jamaica the infamous title: 'The
Most Homophobic Place on Earth.' Gay people have regularly been beaten
and murdered on the island, while authorities do little to stop the
violence. We, as the owners of the Stonewall Inn, birthplace of the Gay
rights movement, refuse to support, in any way, shape or form, the
oppression of any people especially our gay brothers and sisters in
Jamaica,' the Stonewall Inn said in its statement. 'We ask all people
of all walks of life to send a clear message to the Jamaican people and
their government, that as long as they continue to allow and condone
violence and hatred toward the Gay community, we will neither buy their
products nor support their tourist trade. To do so is to tacitly
support the current climate of oppression.'"

The "Rum Dump" will take place at 6:30 pm on Wednesday at 53 Christopher Streeet.