Chuck Hurley's Iowa Family Policy Center is behind a disgusting "guest column" in the Des Moines Register by Karl and Judy Schowengerdt about their late son being "recruited into the homosexual lifestyle" and then dying of AIDS while the homosexuals who recruited him rejected him.

Here's just a bit of it: 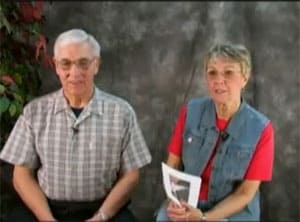 "We knew the tests would leave no doubt, but there simply are nowords to describe the pain of hearing your firstborn say, 'Dad, I'm HIVpositive.' As a parent, nothing can prepare you for the loss of achild to a terminal illness. It's somehow worse when that illnessresulted from your child's reckless decision and his own actions.Witnessing the daily physical deterioration of our son caused greatpain and sadness to us as parents and on the extended family as well. Itwas interesting to note that once Randy was diagnosed HIV positive, thehomosexual community who had actively recruited him and had claimed tobe his 'family' were nowhere to be found. As his health declined, hespoke frankly about the homosexual experience. Randy said, 'It is notan alternate lifestyle. It is a cult.' For years, my wife and Ihave watched the media and homosexual activists work together toredefine family and marriage in our society."

And there's a video that comes with it. Watch it, AFTER THE JUMP…

To the Schowengerdts: I'm very sorry for the loss of your son but it's bigotry like yours which prevented the U.S. Government from recognizing AIDS and taking steps to curb it until far too late. No doubt your bigotry also prevented your own son from accepting who God made him. A very sad tale indeed.