Arlen Specter was originally a Democrat who was wooed by the Republican party in 1965. Specter explains he had an interest in being Philadelphia DA. At the time he was an attorney who had been investigating corrupt judges. 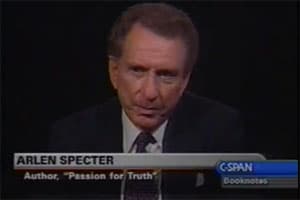 Explains Specter in a C-SPAN interview: "They went after gays. They had a theater called the Family Theatre on east Market street where gays assembled and the vice squad would go and arrest them and take them before magistrates who would extort large sums of money to discharge them or then if they didn't pay off, to hold them, and I had convicted quite a number of magistrates in this probe and the head of the Democratic party didn't like that because these were a lot of very powerful political leaders."

Specter was then wooed to run on the Republican ticket.

Watch the interview with Book Notes, AFTER THE JUMP…