Oft-cited by right-wing religious groups and the Catholic church, the 1979 Homosexuality  in Perspective book by sex researchers William Masters and Virginia Johnson, has nothing to back it up, we learn, 30 years later… 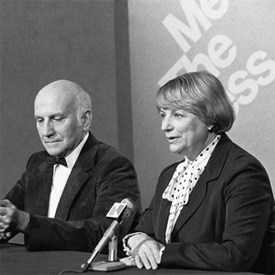 "Back in 1979, on Meet The Press and countless other TV appearances, Masters and Johnson touted their book, Homosexuality in Perspective—a
14-year study of more than 300 homosexual men and women—hoping to build
on their groundbreaking sex studies of heterosexuals that had helped
ignite America's sexual revolution…When the clinic's top associate, Robert Kolodny, asked to see the files
and to hear the tape-recordings of these 'storybook' cases, Masters
refused to show them to him. Kolodny—who had never seen any conversion
cases himself—began to suspect some, if not all, of the conversion
cases were not entirely true. When he pressed Masters, it became ever
clearer to him that these were at best composite case studies made into
single ideal narratives, and at worst they were fabricated. Eventually Kolodny approached Virginia Johnson privately to express his
alarm. She, too, held similar suspicions about Masters' conversion
theory, though publicly she supported him. The prospect of public
embarrassment, of being exposed as a fraud, greatly upset Johnson, a
self-educated therapist who didn't have a college degree and depended
largely on her husband's medical expertise…"