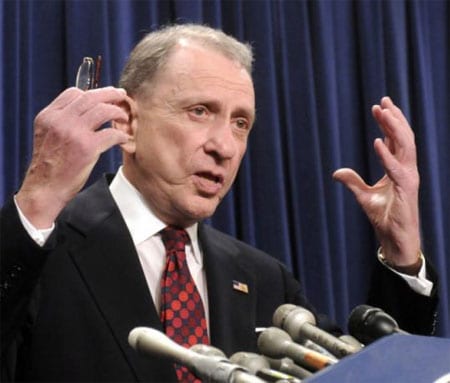 "Pennsylvania Sen. Arlen Specter will switch his party affiliation from Republican to Democrat and announced today that he will run in 2010 as a Democrat, according to a statement he released this morning.Specter's decision would give Democrats a 60 seat filibuster proof majority in the Senate assuming Democrat Al Franken is eventually sworn in as the next Senator from Minnesota. (Former Sen. Norm Coleman is appealing Franken's victory in the state Supreme Court.)' I have decided to run for re-election in 2010 in the Democratic primary,' said Specter in a statement. 'I am ready, willing and anxious to take on all comers and have my candidacy for re-election determined in a general election.'He added: 'Since my election in 1980, as part of the Reagan Big Tent, the Republican Party has moved far to the right. Last year, more than 200,000 Republicans in Pennsylvania changed their registration to become Democrats. I now find my political philosophy more in line with Democrats than Republicans.'"

Obama welcomes Specter: "Thrilled to have you…"

Andrea Mitchell reports on the switch, AFTER THE JUMP…

Previous Post: « New Yorkers Lobby for Marriage Equality in Albany #ejday
Next Post: Israeli Army Soldiers Remake ‘What What In the Butt’ »