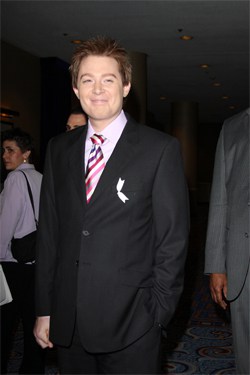 Clay Aiken is bitter, and letting it be known. Defamer received this screed the former Idol contestant posted to his blog following the Idol finale.

And keep in mind, while reading it, that a few weeks ago Aiken dropped in on the Idol set unannounced (and for whatever reason) was quickly escorted off the premises because his relationship with the producers is so bad.

Now that it's all over, and for the record…. I couldn't be happierabout the way AI ended this year. I only turn the show on once aseason, and only to see what the set looks like each year. This year, Ihappened to turn it during the minute that Adam Lambert wassinging "Ring of Fire" and, at that moment, thought my ears wouldbleed. Contrived, awful, and slightly frightening! I wasn'treally a fan and found myself surprised whenever folks told me thatthey liked him. Granted, I never saw another performance (and manyfolks who I trust said that he was great) but I can't imagine I wouldhave enjoyed it. Just not my cup of tea at all. To each his own. Inever saw Kris sing on the show, but whether he was good or not isreally relative. It's usually a matter of taste, right? But Idol is notalways a matter of musical taste only. It's about the person you like.From what little I saw, Kris seemed likable. (That's not to say thatAdam isn't just as likable as anyone.. maybe more so… I don't know)When Ruben and I were standing next to each other every night (manyyears ago) you had two equally talented, equally unlikely, equallyunpolished contestants…. so it really was a matter of taste as to whowas voted for. While some may argue that one of us was hyped more thanthe other, I don't feel that was the case. However, this year, therewas an obvious bias. Not even having watched the show, I can tell youthat I was WELL aware of the bias from the judges as to who should win.In my opinion, that is awfully unattractive. I don't think I am alone In my opinion, it all often comes down to that last night of voting.

Until the finale, folks are voting for the contestant that they want tosee continue. But, I believe that on that last night, the dynamicchanges. No longer forced to choose one person that they want to seewin, the audience can effectively vote AGAINST the person that theydon't want to see win. In the case of season two this might havehappened. There may have been some folks who voted for myself or Rubenbecause they didn't like the other of us. I was the nerdy little girlyboy who some didn't want to see win, so they may have voted for Ruben.I don't know. .. But again, I feel that Ruben and I were fairlymatched. We both had our detractors and negatives, but I feel we wereboth very worthy of being on that stage in that moment, and either ofus would have been worthy of winning. The show was different then, andfolks made it in seasons 1-3 because they were "real" people whohappened to sing/entertain well. But, somewhere along the way, AIstopped being about real people.

In a battle between David and Goliath, my money is on David!

I think many voters got sick of being "told who to vote for". Ithink many were turned off by the blatant favoritism shown towards onecontestant. Therefore, on that last night, they used their votesagainst a contestant that they were tired of hearing about and for thecontestant who had been written off. And, at the same time, I thinkthey voted AGAINST an American Idolthat has, for four years now, been more about the slick productions andpolished contestants than it has been about finding the raw talent thatit did in its first three seasons.

Those votes for Kris were also votes to return the show to its rootsof finding "real" contestants with undiscovered talent and giving themthe chance to grow and shine. They were votes that said "we're tired ofseeing contestants who already seem to know it all".

Will American Idol choose to listen to the resounding and clarioncall that those voters gave them?…. "Enough with the pretention. MoreRubens, more Clays, more Fantasias and Tamyras and Kellys please." Myfaith has always been in the voters. I think they have gotten it rightevery year (mine included). It's now up to American Idol to decide ifit will finally REALLY listen to the folks that keep it on the air.

Not attractive. But it makes you think about the similarities and differences between Aiken and Lambert. They're both closeted drama queen second-place Idol contestants with sexualized photos that surfaced on the internet. It's just that Adam doesn't seem to care.