One of the main points in Kirby Dick's new documentary Outrage, which exposes closeted politicians with hypocritical voting records, is that the media for many years has been complicit in stoking that hypocrisy by refusing to report on it. 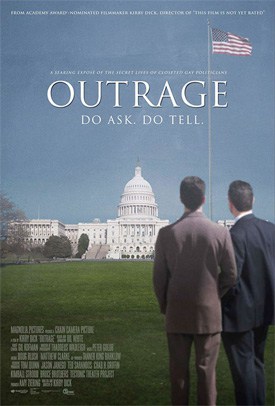 Which makes National Public Radio's censoring of names from a review of the film by Nathan Lee all the more disgusting. NPR "trimmed the review" according to Indiewire, cutting mention of those named in the film, without telling the writer they were doing so.

Said NPR’s executive director of Digital Dick Meyer to Indiewire: “NPR has a long-held policy of trying to respect the privacy ofpublic figures and of not airing or publishing rumors, allegations andreports about their private lives unless there is a compelling reasonto do so. This may be considered old-fashioned by some, butit is a policy we value and respect. We neglected to inform the authorof the ‘Outrage’ review about this policy when the piece wascommissioned, a simple oversight we regret…Only an overriding public need to know can justify intrusion into anyone’s privacy.”

Mike Signorile notes: "This is the same idiotic behavior we've seen coming from many inthe media for 20 years on this issue. It's encouraging that some newsoutlets have moved on it — the LA Times, Philly Inquirer and othersreported on those discussed in the film — but it's pathetic that somejust can't seem to break out of their rigid and ultimately biasedthinking. By not discussing the names of those in the film, NPRis most certainly passing judgment on homosexuality, on the filmmakerand on the public figures involved — deeming that, if they have secretgay lives, it is the most horrible thing imaginable. They are alsodeciding to suppress legitimate news because of that distaste and bias." 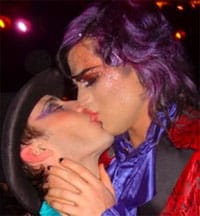 And Movieline responds to NPR's statement: "We love blanket statements like those, because they’re so easy to disprove! Naturally, we found plenty of evidence that NPR iswilling to speculate on the sexuality of public figures — especiallywhen those figures are entertainers instead of influential Republicanpoliticians. In the last month, NPR was all too happy to run an editorial about the sexuality of American Idolfrontrunner Adam Lambert, wherein writer Linda Holmes snarks on themedia outlets that are reticent to fully acknowledge what she presumesis Lambert’s homosexuality. And this past November, after comedianWanda Sykes came out as a lesbian at a gay rights rally in Las Vegas, NPR spent minutes of airtime discussing whether it would lead Queen Latifah (who’s never publicly stated that she is a lesbian) to do the same."