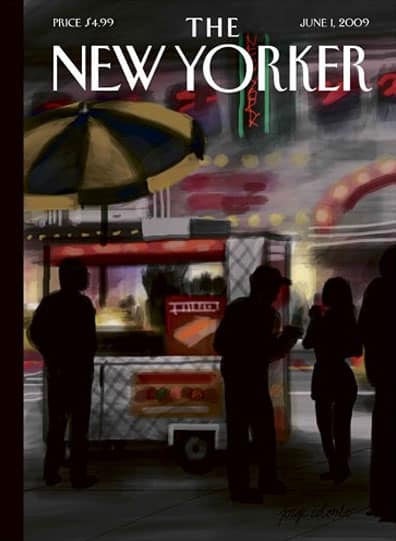 It's likely the same app David Hockney is using to paint his mini-masterpieces on the iPhone. Jorge Colombo used the iPhone app 'Brushes' to "paint" this nocturnal scene of a hot dog stand outside Madame Tussauds on 42nd Street for the June 1st cover of The New Yorker.

Said Françoise Mouly, the art editor for The New Yorker: "The best feature of it is that it doesn’t feel like something that wasdone digitally; quite the opposite. All too often the technology is directed inonly one direction, which is to make things more tight, and this, whathe did very well, is use this technology for something that is freeflowing, and I think that’s what makes it so poetic and magical."

A video of Colombo's process, AFTER THE JUMP…