Multiple news outlets are reporting that President Obama will name 54-year-old Sonia Sotomayor as the replacement for David Souter on the U.S. Supreme Court. Sotomayor would be the first Hispanic member of the court. 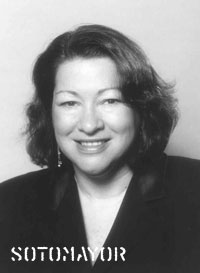 Sotomayor, of Puerto Rican background and born in the Bronx, currently sits on the U.S. Court of Appeals for the 2nd Circuit, She's a graduate of Yale Law and an editor of the Yale Law Review. Both she and Souter were appointed to the U.S. District Courtfor the Southern District of New York in 1992 by George H. W. Bush. President Clinton nominated Sotomayor to the appeals court.

The Caucus reports: "The President reached his decision over the long Memorial Dayweekend, aides said, but it was not disclosed until Tuesday morningwhen he informed his advisers of his choice less than three hoursbefore the announcement was scheduled to take place. The president narrowed his list to four, according to people closeto the selection process, including Federal Appeals Judge Diane P. Woodof Chicago, Homeland Security Secretary Janet Napolitano and SolicitorGeneral Elena Kagan. In what may be her best-known ruling, Judge Sotomayor issued aninjunction against major league baseball owners in April 1995,effectively ending a baseball strike of nearly eight months, thelongest work stoppage in professional sports history, which had led tothe cancellation of the World Series for the first time in 90 years."

WaPo: New York judge rises from projects to the Supreme Court…"Sotomayor, who has a brother who became a doctor, presided over a civiltrial in 1996 in which the family of a lawyer who died from AIDS suedthe makers of the movie, 'Philadelphia,' contending that Hollywoodstole their story. The case was settled but not before the movie withits dramatic courtroom showdowns was aired in court in its entirety,prompting Sotomayor to caution: 'I don't expect melodrama here. I don'twant anybody aspiring to what they see on the screen.'"

The President is scheduled to make his announcement at 10:15 am EDT.

Related: Karl Rove talks about Sotomayor as a possible nominee on FOX News earlier this month, AFTER THE JUMP…