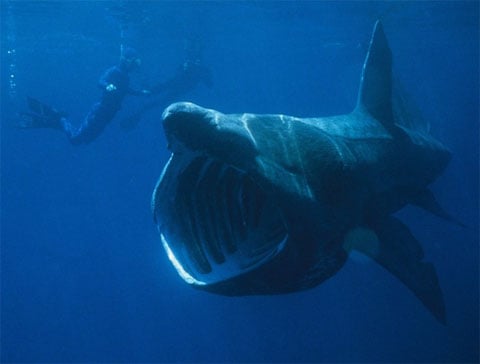 Some Friday nature news for you, since I know you've all been wondering where the Basking shark goes all winter. Scientists have finally solved the mystery they've been trying to crack for 50 years: 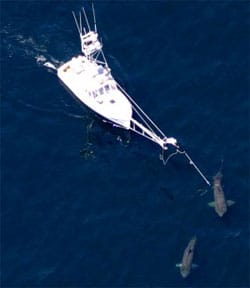 "Skomal tagged the giant fish off the coast of Cape Cod,Massachusetts and tracked them by satellite, piecing together theirmysterious winter wanderings. He discovered the beasts were abscondingto the depths of the Caribbean, some voyaging as far as the Braziliancoast, though the attraction of these destinations poses yet anothermystery. The findings have implications for conserving the sharks,whose fins are much-desired delicacies in Chinese cuisine. The basking shark is a benign behemoth. It swims at about threemiles per hour with its four-foot-wide mouth gaping open, filteringthrough almost 500,000 gallons of water every hour for its planktonsustenance…He found the sharks were traveling well-outside their known range,spending months in the warm waters of the Caribbean and even deep intothe southern hemisphere. They also periodically dove to more than 3,000feet, and often stayed at those depths for months at a time. One sharkremained at a depth of nearly 600 feet for upward of five months."

Makes you wonder what else is down there.

A video of Basking sharks feeding, AFTER THE JUMP…